What’s a tech show without a Google-style scavenger hunt? Google may not always have the largest presence at tradeshows from the perspective of a physical booth, but that said, the Android Things team are here this year.

Google is well known for their scavenger hunts, be that pins or badges, or both – Google loves to scatter their tiny treasures across the show floor and make you go find them. We’ve previously written about the pin hunts at Mobile World Congress, as well as Google’s overwhelming presence there.

For those brave (and lucky) enough to traverse the halls of an event like IFA or MWC, you may be rewarded with a Googly prize. You are then informed that should you collect “enough” you can drop by the Google Gumball machine and win a prize.

To seek your badge this time you had to hunt down an army large enough to scare off even a Mongolian horde of Google Assistant helpers all dressing in their white assistant jumpsuits, hats and all-important bum bags full of badges. 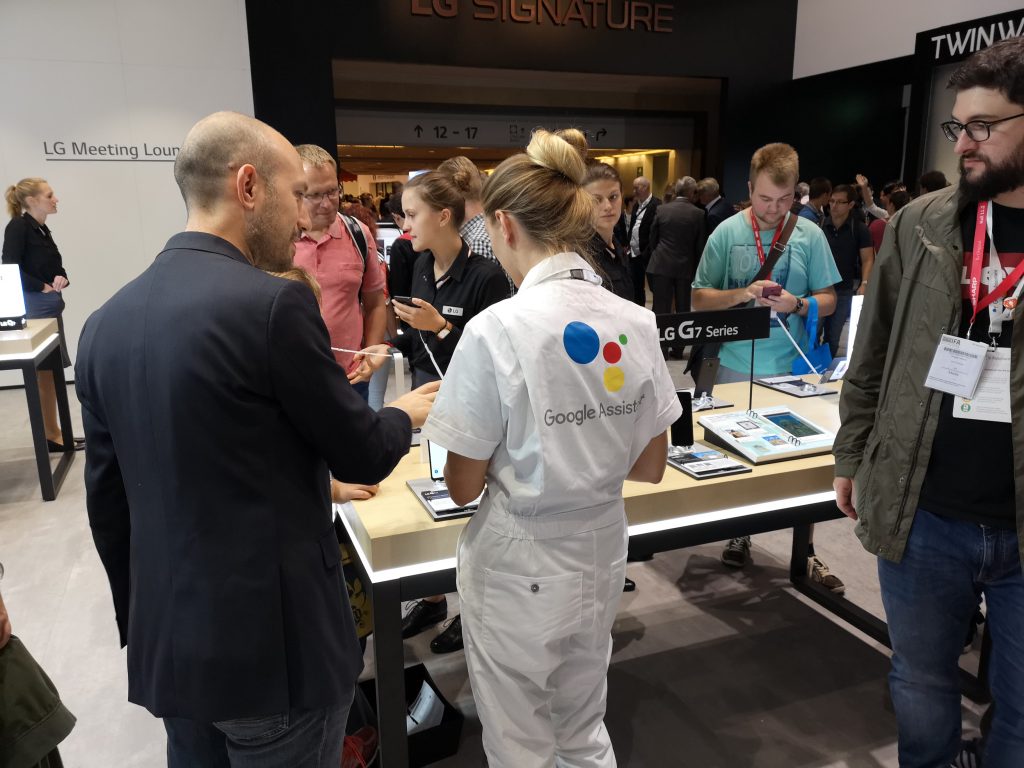 Quickly you find out that there are 5 different colour badges each with 4 different designs depicting a function of the Google Assistant: what are the colours? You guessed it – red, green, blue and yellow – Google’s colours, plus grey for the Assistant itself. I found there were two ways to get their precious 2cm round lumps of plastic, paper and metal.

You could walk every hall and engage in a game of Where’s Wally Google Assistant-style then roll the dice and hope you get a full set, or you could arrive early when everyone’s badge bags were full, use your best manners and within 5 minutes you have a full set. I tried it both ways, I recommend the latter! Armed with my full lanyard of 20 buttons I arrived at the Google Gumball machine, a 4m tall box of wood and plastic. After waiting my turn (thankfully I was there at opening time, in the rain, on a media day so I had a queue of one – me) you are presented with a Google Assistant TV depicting Rube Goldberg-style machine with 4 paths. All you had to do is say a simple phrase in German. In my perfect skippy English I mangled the test so hard the attendants assisted “due to the rain noise”. Thanks Google Assistant assistants!

How is one rewarded for their efforts? The gumball machine pops out a coloured ball and inside is your prize, I saw people win Google Home Minis and Google Play gift cards, in Euro. Luckily for me I emerged triumphant with a Google Home mini complete with EU power plug. And that’s the Google madness for another tech show over. One thing is for sure, the Google Assistant brand got a hammering in Germany today, with hundreds of people collecting thousands of badges and many a Google Home Mini dispensed I’d say “Ok Google, job well done”.