When talking about phones it seems bigger is better these days, but startup company Unihertz is going the other direction with two phones, the Jelly Pro and Atom, two diminutive devices big on features, but low on price.

Both phones are products of the crowd sourcing craze though Unihertz actually came through with their project, delivering the Jelly Pro to their backers last year, a tiny little smartphone with 4G that fits the coin pocket on your jeans. The Atom is the ruggedised version, and has just completed a successful run on Kickstarter with plans to sell the phone on Amazon Australia and around the world later this year. The Jelly Pro has only a tiny 2.45″ 240×432 resolution display, with a 1.1GHz quad-core Mediatek MT6735 processor with 2GB RAM and 16GB of on-board storage. You get cameras, both an 8MP Rear Camera with Auto-Focus and a 2MP Fixed Focus front-facing camera as well. Powering all this is a 950mAh battery, which given the low power processor and small screen should be surprisingly hardy.

Now, there is a downside in terms of the connectivity with the phone not supporting all the available 4G bands we use here in Australia. The Band 3 (1800MHz) network used by all three carriers in Australia is present, so 4G is available but there’s no Band 28 700MHz support which aids in building penetration for urban areas.

The phone ships with Android 7.0 (Nougat) on board, and from what we’ve heard it’s essentially stock Android which is a great spec to keep in mind.

In terms of cost, the Unihertz Jelly Pro will cost you $179.99 and it’s shipping from Amazon now in Sky Blue, Space Black or Pearl White colour options. 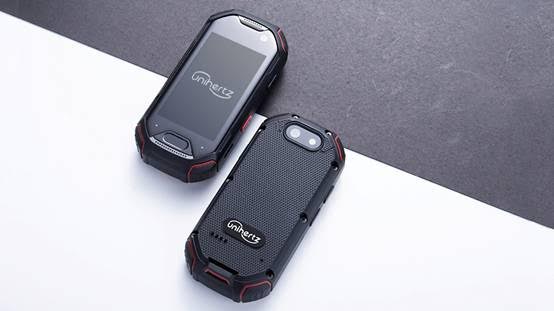 If the Jelly Pro isn’t quite as tough as you’d like it, then the Atom is likely more up your alley. The Atom has taken a lot of the things people loved about the Jelly Pro and added to it, with a few extra features like an upgraded Octa-Core processor, 4GB RAM and 64GB storage. There’s also updated camera sensors as well with a 16MP sensor on the rear and 8MP on the front. Unihertz has also included NFC, a fingerprint scanner and a programmable button on the side to let you access all your favourite phone functions. 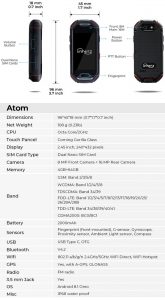 The good news is that there appears to be better support for our Australian network bands with band 28 supported (we use Band 28a).

In terms of ruggedness, the Atom looks the business. The Atom has IP68 dust/waterproofing as well as shockproofing. Unfortunately it doesn’t appear to include any MIL-Spec rating, nor are there any details on just how shockproof the phone is.

Pricing is around $219USD on their Kickstarter campaign, an increase over the Jelly Pro but then with the increase to specs and ruggedness you’d expect that. What price it will be when it reaches our shores isn’t clear, but we do know it will be available on Amazon around November.