I was expecting it, but when a delivery arrived with 3 Kindles on board I admit to having quite the grin. I’ve used Kindles and Kobo eReaders in the past, but my Kindle died many moons ago and I’ve used my tablet for reading since. Technology has come such a long way since my last Kindle purchase – I was genuinely excited to see the changes and how far the user experience had come.

As I had limited time with the devices and wanted to get hands across all 3 devices, I enlisted the help of my wife who is an avid reader in assessing the latest batch of Kindle hardware from a user experience point of view, not just the tech side.

As a starting point, here’s the Amazon comparison table on the three models available in Australia. There’s a lot to like about each of them and the prices are quite attractive on several levels depending on your needs from an e-reader. An aspect of the experience I have had with the kindle devices to date that I’ve enjoyed greatly is the simplicity and consistency of setup. It is simply a matter of:

At the centre of the Kindle experience regardless of the model you choose is the Kindle Store. You can access the store via either web interface or on your Kindle device to purchase and download books (provided you have a credit card attached to your account) with a simple search and purchase process.

The base model of the collection and will set you back AU$109.00 which isn’t an impulse buy for most people, but not something you’d have to think too hard about. It’s the most basic of the Kindle range and has a very simple purpose – reading books. There is no backlight, so you need to be in a relatively well lit area and even then if the light is coming from the wrong angle you may have some difficulty reading the screen. If I had to identify a target buyer for this, it would be someone that generally reads during the day or in well lit rooms for short time spans. The Kindle does a job, does it well and is really simple to use. The simplicity of setup makes getting going with it easy and the only thing going against it is the lack of a backlight.

When I spoke to Jo about the Kindle one of the first impressions she had was the unusual placement of the power button (in comparison to Android devices) but in hindsight it makes sense due to the orientation of the device and potential of users holding it with one hand for reading.

The hardware is very light, easy to hold and the physical size coupled with these factors make single handed operation really easy. Initially her thoughts were that with a tablet, where is the market for Kindle? Quite quickly though, she warmed to the convenience of the physical size, taking it with her when there was only short amounts of time available for reading.

The only negative comments (which I completely share) on the Kindle that she had was the refresh time for the screen is slow when compared to a tablet and that the lack of backlight makes reading quite difficult in certain lighting conditions.

An extra AU$70 over the base model but immediately the first upgrade moving to the Paperwhite was evident as soon as it was turned on, the backlight is gentle and easy on your eyes. After spending time with the Kindle and the Paperwhite, I’ve also found that the resolution on the screen (unsurprisingly) makes a big difference in the readability of the screen. After only a couple of days it’s really easy to see why the Paperwhite is the best selling Kindle device. For a small added cost you’re getting the backlight, the higher resolutions screen and (even with the backlight running all the time) a battery life that is slightly better than the base Kindle.

By the time a week rolled around I’ve found myself quite attached and reading more than I have in years. I like the screen and how easy it is on my eyes when reading, particularly in low light and I’ve really enjoyed the simplicity of the experience with both devices.

Much like my thoughts on the paperwhite, Jo had positive things to say about the screen with the improved resolution, noting that the presentation is cleaner and far crisper making it easier on your eyes. For those of you in the right age demographic the comparison was that of CRT to LCD monitors. The other two major comments that came through was the physical size of the paperwhite being noticeably, but not in a “bad” way larger than the base Kindle. This meant that changing pages and general use was cumbersome in comparison but something that could easily be adjusted to, making it not an issue at all.

The other consistent criticism both of us had on this as well as the base model was that it is slow resolve on page switch when compared to a phone or tablet. This doesn’t mean there’s a failure of the hardware though. We recognise that there is a technological difference, but believe that this lag is worth mentioning for anyone looking to go down the path of a Kindle vs tablet.

The Oasis is another step up in specs, functionality and included goodies. The backlight has a more even feel to it as it seems to adjust to the light around it. Like the Paperwhite, while an inch larger, the screen is very easy to read and is easy on your eyes in varying light conditions. The other immediate difference the Oasis has over the base Kindle and Paperwhite is that the package includes a cover. Where the Oasis varies greatly from a technical standpoint is the main selling point — the IPX8 waterproof rating means you can read safely in the bathtub or swimming pool without fear of killing your kindle if you drop it. This means that the device not only responds to the screen tap for page changes, but there are also physical buttons to change pages as well. There’s a lot to like and some lovely bonuses in the Kindle Oasis, but I’m just not sure it’s worth the $389 vs the Paperwhite at $179 unless you need that waterproof spec.

There’s several likes for the Oasis that Jo brought up both generally and compared to the other models. The change page buttons are “nice to have” but with the touch screen, not necessary unless you’re using them in a water setting like a pool or bath. The other real bonus here for someone who reads a lot is the charging plug being on the top edge of the device rather than the bottom. This removes the aggravation of the cable catching your clothing or generally getting in the way while you read. 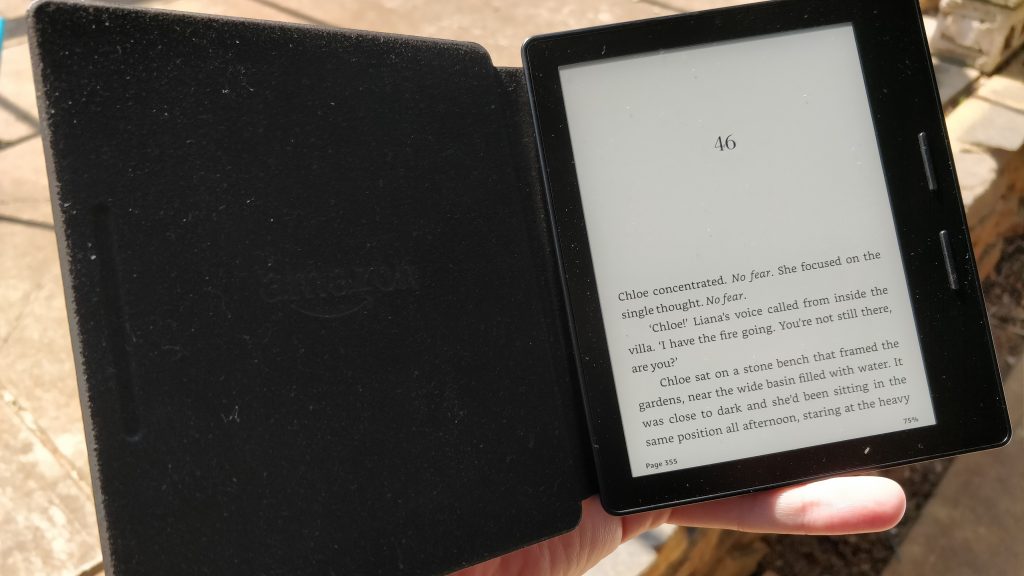 On the downside, when the device is in standby there’s advertising on the screen. The Kindle and Paperwhite both had some pretty images in place and neither of us are really sure why Amazon are selling the Kindle store to someone who has already purchased a Kindle?

With the simplicity of the experience and the devices the beauty of Kindle is that it’s distraction free. When you’re reading, there’s no notifications popping up – no email, just you and your book and I really did love that. The battery life is outstanding and allows users to charge and forget for quite some time, making them extremely useful for commuters who read on the bus or train regularly.

The books are reasonably priced and any of the Kindle models will hold thousands of books, making them a travellers best friend.

I was genuinely and very pleasantly surprised at how much I’ve enjoyed the Kindle experience, there’s a convenience factor that just isn’t there with larger tablets and the ease of use for longer periods on your eyes is mindblowing. The cost is fairly insignificant when compared to other electronic devices and (despite my reservations initially) quite frankly – I’m sold!

The Kindle range offer a cost effective, space efficient way to purchase and carry books that’s easy on your eyes and provides a great user experience. All three can be purchased from Amazon online at $109 for the base model, $179 for the Paperwhite and $389 for the Oasis.

I’ve owned 4 Kindles and 2 Kobos over the years and my favourite is my current Voyage. I’m surprised they don’t seem to be selling them any more.

Pretty sure the voyage became EOL in July/August.

Have had my paperwhite for years and love it. Oasis is nearly impossible to justify at that price and not going to happen if they have advertising on it.
Nice work Phil.