Customers who previously paid for additional storage from Google are receiving an email advising their storage account ‘has been officially upgraded to Google One’.

Google One combines the storage of the three services into one simple interface where you can see your online storage in one place. Google One also offers the option to share storage with up to five family members with various storage options ranging from 100GB to 30TB. 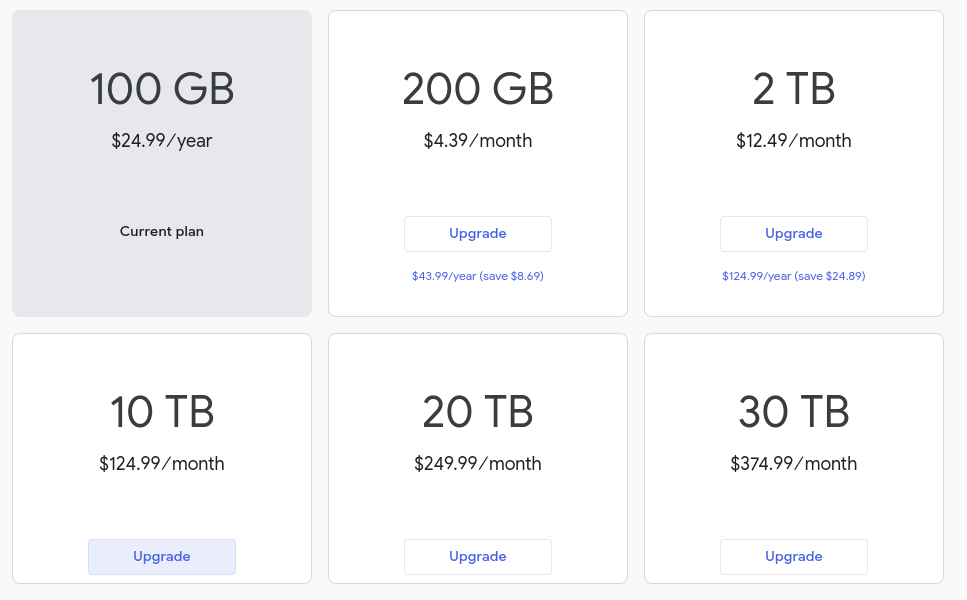 As well as offering storage, Google offers additional ‘benefits’ including access to a team of Google experts who can answer any of your questions, including giving help recovering a file you accidentally deleted or teaching you how to use Gmail when you’re offline.

The Google One interface is live on the web now for users, as is the Google One Android app on Google Play. The app is now able to be installed by Australian users and lets you manage your storage plan, contact Google’s team of experts, access member benefits and share your plan with up to 5 family members.

Google One members will also receive bonus offers including ‘credits on Google Play or deals on select hotels found in Google Search’. Google intends to add on more benefits over time as well like deals on the Google Store and more in the coming months.

There’s a bonus in the mailout to Google One customers with the initial offering a $7 credit for use on Google Play available via redemption. The service is only available to customers who’ve updated their existing Google Drive, Photos or Gmail storage accounts, though Google will begin offering the service to new users soon. If you’re interested in checking it out you can head to the Google One sign up page now.

I’ve been a Drive customer for years but I am still waiting for my invite to One.

Every phone gets unlimited free photo uploads with Google Photos. There literally is still no point if that’s all you want it for.

@Scott Murphy yes but they’re compressed photo files. Only the Pixel phones can upload photos at their original size for free, but i think it’s for a max of 2 or 3 years!

I suppose the family sharing would be the main benefit. I use Dropbox but just have top level folders for my wife and I.

Agree pricing remains poor. I guess Google are saying if you need more than 2tb then you’ll pay whatever anyway. Do many services offer a > 2tb option. The 200gb to 2tb gap send pretty poor imo.

Strange. Why would I go for 10TB? It’s 2x the price of the 2TB package per TB…. shouldn’t it be either the same price or cheaper per TB?

“The service is only available to customers who’ve updated their existing Google Drive, Photos or Gmail storage accounts”

I have 2 accounts which have additional storage, but i am not able to use One.