Android Auto is something that some of us have but many of us wish we had. Some car manufacturers have gotten onboard with Android Auto (and Apple Carplay) realising that it is actually beneficial to them but there are also many (cough cough Toyota) who for some reason seem to think their clunky, ugly, slow, old fashioned infotainment units are a great experience for users.

This year Kenwood have released some high quality Android Auto head-nits, the first company to release one with the HD display. When the opportunity to check out one of these head-units, the DDX9018DABS to be exact, I jumped at the chance.

To find out what I thought of the Kenwood DDX9018DABS (and why I ended up purchasing it) read on.

What makes this different to all the others?

The Kenwood DDX9018DABS is a double DIN aftermarket head-unit that fits in a standard double DIN slot. It has the standard 6.8 inch display but what sets it apart from the pack is the quality of the display. Many, in fact most, aftermarket head-units have a 480p display. Kenwood have decided to hit the high end of the market with a 1280 x 720 resolution TFT display with an active matrix.

As soon as I turned on the car and saw the display of it for the first time I was hooked. The colours are so vibrant, the brightness so much brighter than my older head-unit, and not only that the touch sensitivity was far and away better than anything else I had ever experienced. Unfortunately taking pictures of displays rarely does the display justice and in this case it certainly did not.

The colours jump off the screen, making it much easier to see the maps quickly — get those eyes back on the road faster. The rear camera showed up so well in both day and night conditions, far better than my previous unit, using the same camera. The improved resolution of the display meant that everything was crisper and better to view.

What about the audio?

I love my audio and I love it loud and of high quality. In saying that the Focal speakers I have in the car are not top of the range but are close to it, as well as the focal digital amp, Alpine sub and matching Alpine monobloc digital amp.

The Kenwood DDX9018DABS sounds great. I love turning up the sound loud and pumping out the metal or some old skool hiphop on the way to the gym and this head-unit was easily able to accomodate my penchant for loud music.

The head-unit has a 192kHz/32bit over-sampling DSP and when combined with high quality, custom-made, carefully selected parts the sound it produces is a great representation of the signal going into it — be it from a streaming service, the CD or a USB. There is also a 13-band equaliser with digital time alignments and 3-way cross-over mode with three 5.0v preouts.

As for tuning the head-unit to get the sound correct it allows you to adjust the equaliser to how you want it, for individual types of music, changing the sound effect, the location that the music centres to (zone control), volume offset for various sources and well as some random sound effects that actually make some nice changes to the music.

For those interested in the detailed specs of the head-unit head over to the Kenwood website and check them out.

The only time I do not use Android Auto in my car is to listen to the radio (usually the footy). The Kenwood DDX9018DABS not only has digital radio (hence DAB in the name) but also has a playback function!! Yep, that’s right, if someone talks and you didn’t hear something you wanted to hear, and it happens to me a lot, you can rewind to hear it. This function in itself sold the head-unit to me.

As well as this there are a heap of other functions on the Kenwood side of things including Air Mirroring over Wi-Fi if that is your thing rather than Android Auto as well as Spotify, iPod, CD/DVD, USB, HDMI and Av in.

One of the pitfalls of the early Android Auto head-units was that they only trickle-charged phones while they were connected to the unit — barely enough to keep it at the same charge while using. The Kenwood has “fast charging” which is 1.5A, whereas most other units only have 1.0A. It was not enough to get you fast charging like Qualcomm Quickcharge 3.0 but drive for a decent length of time and your phone will become fully charged.

The bulk of the software for the head-unit is in the audio tweaks, allowing you to alter the sound until you find something just how you like it. The sheer number of tweaks there are can be a bit overwhelming at first glance but one by one you can apply and turn off to see how you prefer each setting — let’s face it, everyone likes to listen to their music differently and this allows this to be accomplished.

What is good about it? 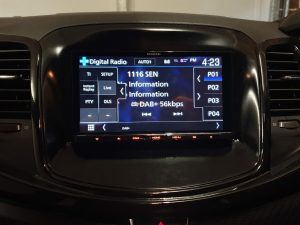 What’s not so good about it?

Kenwood DDX9018DABS: Do I recommend it?

The Kenwood DDX9018DABS is one of the first HD aftermarket head-units to support Android Auto. Kenwood and its sister company JVC have been making Android Auto units for a while. Kenwood are the manufacturer of the higher end units for this company and it shows in the DDX9018DABS. The display is most definitely high end. It is bright, sharp and crisp and extremely sensitive to the touch. The options within the Kenwood software to adjust the audio settings are extensive to say the least.

I found the DDX9018DABS to be easy to use while at the same time offering the opportunity to dig down into the details of the software. It worked with all phones I threw at it, including the experimental wireless proxy Android Auto. There are very few negatives concerning this head-unit, the only being that it lacks something that only a few phones in the world currently support – wireless Android Auto.

I would have loved it to have wireless Android Auto but at this stage it is only supported by phones running Android Pie (or a Google phone of the last few years still running Oreo). It will arrive here eventually but it will not be this year. At a guess and reading between the lines we are looking at later next year (2019) before we see wireless Android Auto land Downunder. For this reason I have purchased this Kenwood DDX9018DABS. Technology moves quickly and you cannot keep waiting for the next thing around the corner to get here because as soon as that arrives there is another new thing around the corner.

If you are in the market for a new double DIN Android Auto head-unit this year you cannot go wrong with the Kenwood DDX9018DABS. Available from all good car stereo retailers for a tick under $1000AU it is well worth the money. It may not be the cheapest around but you get what you pay for.

Scott liked this device and has decided to purchase it for his own use.

This system supports android auto wireless. You just need to activate it in developer mode in the android auto app on your phone.

Does the same come without CD/DVD? I don’t use those, but I want the HD screen

I recently installed a 10 inch android head unit in my 07 Jeep Wrangler unlimited. I bought it off eBay for $350 plus delivery the screen is 1024 X 600 which looks a little pixelated when reversing. It’s faster to use and sounds better than most high priced units I’ve seen. I’m only hoping someone will bring out a 10 inch head unit with 1920 x 1080 and a good high res camera. If they can make a tablet pc with a high res screen and decent camera why not in a head unit.

I have this unit, while the screen in magnificent and the functionality and responsiveness is brilliant I have found the DAC to be lacking. I had a hifiberry DAC pro running my amp any it had good fidelity, a good sound stage and instrument separation, the kenwood however seemed mediocre fidelity is a bit harsh and not much separation. I Don’t claim to picky but I noticed a different, was disappointed after what I paid and what they claimed. I’m not sure any other unit in the same category would be better tho and they are worse for everything else.… Read more »

As someone’s who has a decent sound system in my vehicle focal flax front speakers ,focal amplifier and a focal Subwoofer, amd plenty of Sound damping, with focal bam, I waa looking a while back to step into audio auto world but in the end just used a Audison bit10D processor connected to the factory built in SatNav Bluetooth unit that had come with my Toyoya Fj Cruiser, my smartphone of choice the pixel 2 xl has Android auto and connects automatically and engages on my smartphone, when I start my vehicle connecting to the Bluetooth on the factory oem… Read more »