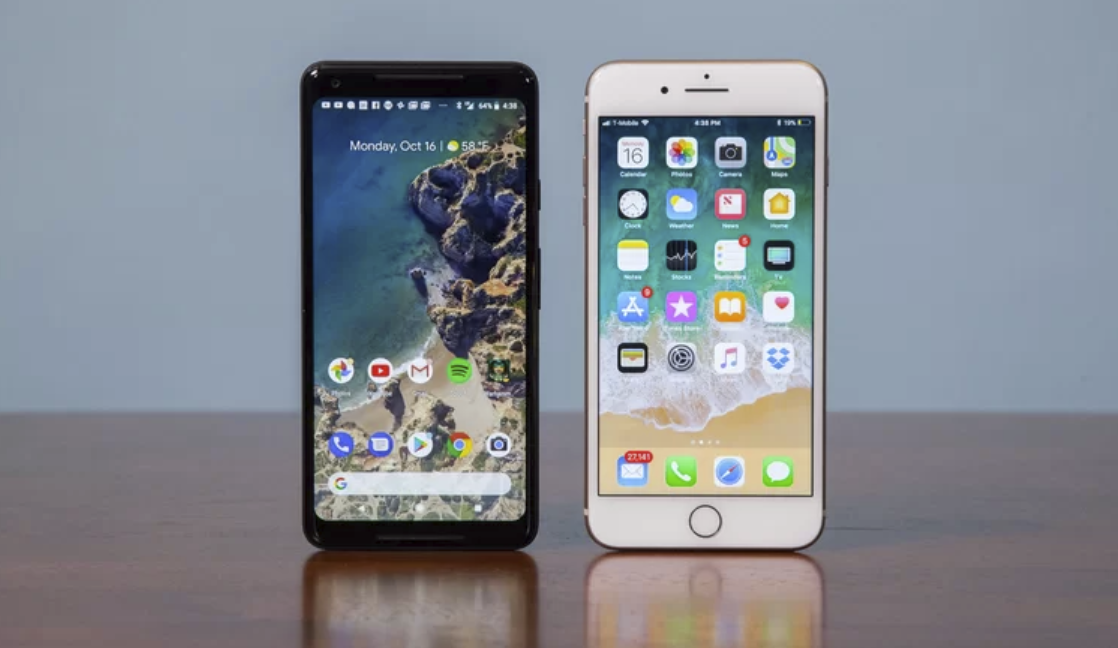 Google’s two Pixel product announcements have occurred a few weeks after Apple’s September iPhone event, and this is – perhaps – no coincidence; not only does it give Google an idea of what it’s up against before releasing, but we’ve found something else.

One interesting relationship in Australia has between the correlation between the release price of a new iPhone and the release prices for Google’s Pixel phones. In fact, in 2016, the original Pixel and Pixel XL were priced exactly the same, dollar for dollar across the lines.

Apple announced its latest phones this week, with prices ranging from $1229 AUD up to an astounding $2369 AUD. Yes, that’s not a typo, the latest top-shelf iPhone costs more than a 65-inch 4K HDR Smart TV. However, it also gives us a fairly competent insight into the price Pixel 3 buyers could be facing this year.

Let’s take a quick look back over the past 2 years of Pixel vs iPhone RRPs in Australia.

In 2016 the Pixel launched and as many of you may remember that the pricing was identical to the “similar models” of the iPhone 7s released just a few weeks earlier:

Last year the Pixel 2 range was launched just after the iPhone 8/ X range with the pricing rising for the XL range and the 5-inch model holding its price inline with 2016’s pricing. It’s important to note that the iPhone 8 had a higher capacity model which pushed down the pricing of other models v.v. the Pixel 2 XL:

Coming into 2018 the landscape has changed a little with Apple having a different device line up consisting of one basic (XR) and two premium devices (XS and XS Max). Looking at the past few years we think it’s likely that the Pixel 3 could be indexed to the XR Max pricing.

Let’s make one thing clear, you could call this data-based predictions, you could also call this blatant guessing, we’d like to think it’s the former but it is, in the end, a prediction based on only 2 years of not completely linear trends.

That being said the cost differential between last year and this year in the iPhone range feels like too much of a jump in price for Google without any real hardware reasons currently known to justify as large an increase. As such we think the Pixel 3 will be priced between the $1079 of the past 2 years and the $1229 of the XR.

The Pixel 3 XL is more difficult to price, with the XS having such a significant jump in price and as part of Apples clear experiment in finding out just how much people will pay for phones. The pricing of those models feel even less indicative, they do however provide a ceiling we just don’t think Google would cross.

Overall we think that potential Pixel proponents down under should brace themselves for a continuation of the $1100 and up RRP Google started this whole Pixel experiment with. Hopefully, however, Google won’t match Apple’s excessive pricing strategy.

I for one am not a proponent for the continual increase in device pricing, while I would consider a notchless 5.3″ 64 GB, Qi Charging Pixel 3, I would never consider a device that costs anywhere near $1500, unfortunately, between hardware repayment plans with carriers and peoples fetishisation of phones, I stand nearly alone in that viewpoint, or at least it feels that way.

For those who feel similarly to me at least, we have the Android One program, mainly stewarded by Nokia in Australia, who provide great hardware, with guaranteed updates at reasonable prices. Which ever way all this goes we dont have that long to wait now.

I’m still rocking a Pixel XL 1, running Android 9 Pie, it cost $330 Australian (72 cents to the US dollar,) it’s now $256 Australian, as well as an iPad 2017, $440 Australian, because Google no longer supports, the Nexus 9, I loved. No software updates, not even security updates, now I find there’s Lineage 16, I could have gotten Android 9 Pie, on my old but 64 bit, 192 graphics processor, resolution level screen tablet, Lineage 16 isn’t as good as stock Android 9, but I wish I’d held on to it. Then, when I gave it away for… Read more »

If goigle wants to sell more phones they need to wake up., Charging an extortionate price does not make your handset more premium or better quality . Other android handsets some of which are very close in spec to pixels , and some imo better build quality , costing one third less or even almost half the price also running vanilla android. I cut samsung some slack because they have every feature but the kitchen sink , and a much more comprehensive software suite and very good hardware too boot. Having a marginally better camera one or two circumstances in… Read more »

I bought and still own the OG pixel. And I will say that I am not completely happy considering how much I paid. The iPhone consistently has more polished hardware than Google’s offering. If they continue to price like that with their mediocre hardware, I cannot justify why I would buy another pixel.

Meh. I’ll just stick to importing my next Sony phone. Excellent battery life, and usually one of the first manufacturers to push out security updates. Just hope that Sony continues to release Compact phones.

Your not the only one Duncan! Would never pay over 1000aud for a phone. Its not justified when phones are so comparable these days and its ridiculoysly stupid how android oems are trynna price themselves out of the market. No sane person in their right mind would huy a lg phone for 1200 or a nokia 8sirocco with last years specs for 1200.

Prices over $1000 are away with the fairies. They only exist because people are trying to show off with their phones (sad) and are never really justified over the $500 phones. You can’t even use the justification of ‘swift updates’ any more – google seem to be incapable of improving the OS and the hardware is getting worse (no headphone jacks).

As my N5 reaches it’s fifth anniversary it’s going to need to be replaced. However I doubt I’ll be paying over $500 and I won’t be swapping it out till 5G actually has some sizeable place in the market.

The problem with most premium non pixel smartphones is they are months behind in security patch updates and software updates, that’s one of the reasons I went pixel route, I got sick of waiting on other oems, what I find laughable is some premium smartphones that recently released the Note 9 for example is still running Oreo, which is a joke, I’m extremely happy with my pixel 2xl, will I upgrade to pixel 3, probably not unless the Pixell Ultra really does exist!!!😜.

My oneplus 5 gets security updates every month, they will soon release Pie and they will do so with a version that has a lot of issues ironed out. The version isn’t a big issue as it is an OS for the device, I would rather have a reliable working device than the latest OS with issues. So no, running Oreo is not a joke at all, you want new versions just to say you have the new version when in reality there is very little reason to have the latest version. No manufacturer is perfect. What is good is… Read more »

Too each his own mate , the way i look at it is this , bargain basement vanilla android going from oreo to the next version of Android does not offer much more , and for the majority of users it is only a barely noticeable difference from the previous version anyway , which imo is still pretty good , And of course its a lot easier for google to do slight changes to the next version of bare bones vanilla android than other manufacturers with more apps , and their own more comprehensive skins for a more comprehensively equipped… Read more »

Yeah if the smaller P3 costs around $1,200, I’ll be getting the Nokia 7 plus at half the price instead. There’s nothing particularly unique about the Pixel, unless the messaging explains something in the actual reveal. Will wait and see for that and then decide.

I think the Pixel buzz is fading every year – with all phones converging in terms of software, OEM’s upping the game in terms of security patch releases and Android one – the only thing we are left with is design and Google fails at that everytime.

What smartphone are you using mate that’s a premium non pixel and not the essential phone, that’s up to date in security patch and software updates?

Notice the words “upping the game” as in getting much, much better, I didn’t say “matching” – P20 Pro is sitting on August patch as is my Wife’s S8.

Not so long ago they would have been months and months out, I believe manufacturers understand this and are doubling down on improving wait times.

Words are just words when it comes to security patch and software updates especially from Huawei!! LMAO

I love how people take one single part of an overall view, ignore the broader comment and laser in on that point, it’s so very droll.

We are on the same side mate…. my thoughts are if you are buying a premium android smartphone like i did with the pixel 2 xl and want a experience with updates and patches that matches the premium price then the pixel is, really the only real route, i started with iphones left after the 6s plus, started with iphone 3gs/4s/5s/then 6s plus, in the time with the iphones ive had samsungs s3/s5 htcs m7/m8/htc10 even a Huawei, mate 9, they were great smartphones generally in everything but the most important parts that we all need in the android space,… Read more »

Cool for you, Love my P20 Pro as you do your Pixel.

I’ll save the $549.00 price difference and suffer the slight lag in security updates etc…

As long as your happy that’s all that matters right?

As you are with the Pixel – win/win for us all. have a great day.

Honestly, don’t get the hype about Google and pixel phones anymore. They are seriously overpriced for what they offer. Sure they might have one of the best smartphone cameras on the market but that’s the only positive thing about them.

Even stock android isn’t special anymore, its getting bland every year. Plus there are so many mid range phones that use stock android these days and offer better value for money.

After my positive experience with the Nokia 8 I’ll be sticking with Nokia for now, especially given their commitment to Android One. Yes, the camera isn’t as good but I can’t justify spending twice the price when the rest of the hardware and software is so similar.

Just another reason I am not buying Pixel. I can’t see how this is sustainable as Apple gets that money for the hype. Google has a smaller fanboy group that would buy their device but really those prices outrageous.