A few months ago Belkin launched their new charging pad and stand so when the Galaxy Note9 landed on my doorstep I knew right where to look to test it’s wireless charging capabilities.

The Belkin BOOST↑UP Wireless Charging Pad that hit my mailbox the next day was something I was looking forward to checking out. I have used wireless charging in the past but not since the Nexus 6, where the charging was slow and trickle charging – at best. Belkin’s 10W BOOST↑UP charger promised to be something else.

The BOOST↑UP charging pad is a Qi-enabled charger with a single LED light to show when your device has been placed on the charger correctly – although most phones have some form of indication themselves.

The charging pad is charged using a proprietary cable and plug which is not ideal for travelling but not an issue if it just sits on your desk at the office. For those concerned with these new phones with glass backs slipping off whatever they sit on there is a rubber circle on the top and a rubber base under the charger to prevent any slippage of the phone or the charger.

How did it go?

The BOOST↑UP charger charged faster than I ever remember wireless charging working but it is not something you would want to rely on to charge your device quickly. The best use of it was to just put the phone on the charger when not using it during the day such that it was topped up each time, continuously throughout the day.

As mentioned above, using the charger as a top up charger worked great but as a charger from when it was low was nowhere near as good as the fast wired charging of 2018. It took two hours to wirelessly charge the phone from 9 percent to 38 percent. When using it as a top up charger the phone remained charged at close to 100% the entire day just by placing the phone back on the charging pad when I was finished using it each time.

The only issue with the charger was that it is difficult to view the phone while it is sitting on the pad – although it takes but a split second to lift it, view it and replace it. The solution is this is an issue for you is to get the Belkin BOOST↑UP Wireless Charging Stand for an extra $10. 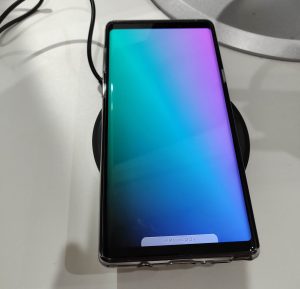 Would I recommend it?

This year it is rumoured that the Pixel 3 will arrive with wireless charging and it would not surprise me if we saw it on the Huawei Mate 20 as well as other phones (OnePlus 6T, LG V40, Razer Phone 2 etc.). Combine that with the multiple Samsung phones that support it there is no doubt that there is a market for a wireless charger.

The charger will not charge as fast as wired charging but will charge faster than most other wireless chargers (according to Belkin). In my opinion its best use is as a top up charger through out the day at work (or overnight) and I can definitely recommend it for that use. I will be getting one myself, possibly the charging stand version if my next phone has wireless charging.

“It took two hours to wirelessly charge the phone from 9 percent to 38 percent.”

Something sounds very wrong there. I’ve got a cheapo blitzwolf wireless charger and can usually charge my Galaxy S8 from empty to full in 2 hours.