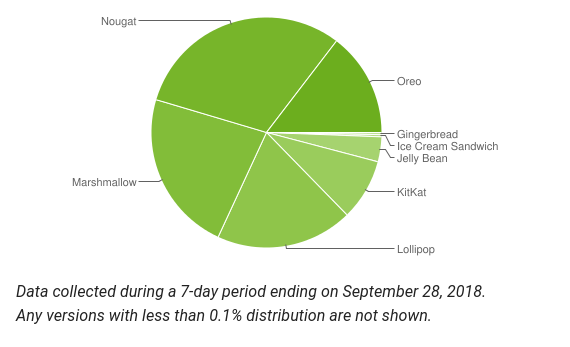 It’s late in the month, but it’s still technically September so Google has delivered with the latest Android Distribution Numbers.

Based on the devices accessing Google Play between September 21-28th, the figures paint a picture of which versions of Android are in use for developers in order to help them target versions.

The big takeaway from these numbers is that still missing from these figures is Android 9.0 (Pie) which came out last month. There are a number of devices running Pie: Pixel, Pixel 2, Essential Phone and now the Nokia 7 Plus, but obviously there’s still not enough to warrant Google including them – maybe next month.

In this months figures we can see devices are being steadily updated (for the most part) aside from Gingerbread and Ice Cream Sandwich which are seemingly the versions which will never die. The rest of the figures are seeing a slow decline, as people either stop using them, or, for more recent devices they receive updates.

There’s not much more to it, but it’s an interesting look into which versions of Android are still in use.

For your convenience, here’s the data compared to last month:

Still the most common being Marshmallow ?
So there are still a lot of people out there with old phone’s it would seem..

I would have thought those cheap Android Go phones would boost the number of Pie users.