Google Pay adoption is expanding in Australia again, with Heritage Bank eschewing their own Tap & Pay app in favour of Google Pay.

Heritage Bank began contacting their customers via text message on the 28th of September to advise their proprietary Tap & Pay mobile payments app would be switched off, with more details on a replacement to follow. Customers are now being contacted to say that the replacement is Google Pay, with the banks Google Pay landing page now live. 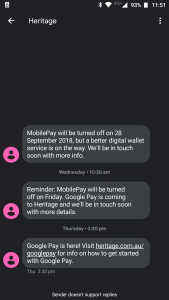 Heritage Bank are advising that ALL Heritage Visa Credit and Debit cards can be used with Google Pay, and Heritage Bank customers can head over to heritage.com.au/googlepay to check out all the FAQs.

Customers will need a phone running Android 5.0 (Lollipop) or higher with a Near Field Communication (NFC) chip and antenna in order to support the Host Card Emulation (HCE) tech which Google Pay runs on. Other than that, it’s as simple as downloading the app from Google Play and following the instructions.

So Mastercard Cash Passport and Qantas Travel Money both use Heritage Bank. Does this mean they can now be used via Google Pay when outside of Australia?

Silly question but how can tap and pay work without an NFC chip? Surely this can’t be a new requirement?!

Some banks supply Tap’n’go NFC stickers you just stick on the back of any phone.