Facebook has confirmed that they are working on a redesign of their Nearby Friends feature that was first introduced in 2015, that shows your friends locations on a map.

Facebook has confirmed to TechCrunch, that the new take on Nearby Friends will replace the list view of the neighbourhoods and cities that your friends are in, replacing it with a map view. The lists of your friends is still present, but the main focus appears to be on the new map view.

The potential privacy concerns have been semi-addressed, with the option to be included in the Nearby Friends feature still only available via opt-in. Facebook has further addressed telling TechCrunch that exact co-ordinates of your friends still aren’t available, simply an approximate location in a neighbourhood or city. 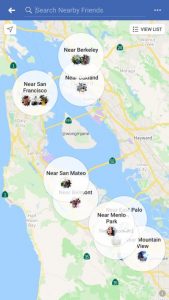 The screenshot was generated from the code of Facebook’s Android app by mobile researcher Jane Manchun Wong. After being contacted by TechCrunch, Wong has also noted that Facebook appears to have deactivated the map view on the server-side.