As expected LG are the first smartphone out of the October announcement blocks with an overnight announcement of the LG V40 ThinQ. LG are looking to gain back some market share with a bit of innovation in the camera space to present a compelling package.

LG usually put the best available specs in their flagships and have seemingly done the same again. They have upgraded the display to a 6.4 inch QHD+ OLED display and in the process have shrunken the bezels even more — 1.6mm thinner on the bottom. Inside is a Qualcomm Snapdragon 845 processor paired with 6GB of RAM and 64GB or 128GB of onboard storage. 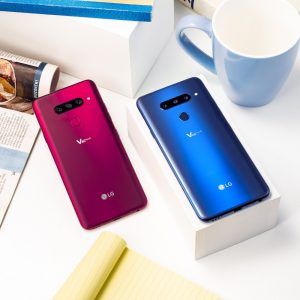 The camera system is where the V40 ThinQ is attempting to differentiate itself from the others. The rear camera setup houses a 16MP 107 degree super wide-angle lens, a 12MP standard angle and a 12MP telephoto lens with 2x optical zoom — the telephoto lens is a new addition for LG. LG are using their own version of a live photo with the “Triple Shot” feature stitching together images captured with each lens into a short video.

The front camera system entails a 5MP wide-angle lens and an 8MP standard angle lens and when working together will create the bokeh/portrait effect that so many people love these days. The amount of background blur effect will be able to be adjusted in the post-processing as well.

Of course LG have included AI within the camera app to “frame, capture and recommend an alternative shot to the one taken by the user” as well as provide an AI AWB to adjust the colour temperature across different scenes. AI Shutter also aids by selecting the correct shutter speed for the scene.

LG make phones that output great sound and the V40 ThinQ promises to be no different with it being the first LG phone to be labelled with Audio Tuned by Meridian. That tuning combined with a 32-bit Hi-Fi Quad DAC and their Boombox Speaker to produce a wide ranging sound that is music to the ears.

At just 7.7mm thick and 169 grams it is IP68 rated and has passed the 14 MIL-STD 810G Transit Drop Test categories for suitability in military operations.

The LG V40 ThinQ has a tempered glass back which is completed in a matte finish and will be available in New Aurora Black, New Platinum Gray, New Moroccan Blue and Carmine Red. At this stage local availability and pricing are unknown but we will update you with any details as they come to hand.

What do LG need to do to get back in the game? Their specs are top end, why can’t they match it with the top end of town?

I like the look and features of the phone, I do not like LG’s history of slow updates. So it’s a no from me.