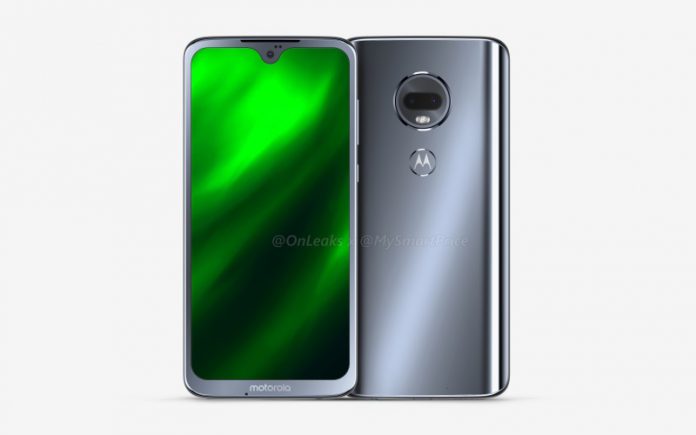 The overall Moto line may be getting smaller, but the Moto G line is about to get bigger and the first look at the new Moto G has leaked overnight with CAD renders showing off the phone in new 360-degree CAD renders.

As you’d expect, the CAD renders are courtesy of Steve Hemmerstoffer, the man behind the @onleaks twitter account who has been supplying CAD renders for some time. The leak is posted over on MySmartPrice, and shows the Moto G7 off from all angles.

The renders show that the Moto G7 will have a teardrop notch in the display, eschewing the overly-large bucket style notch on some phones for a more elegant looking notch that simply includes the front-facing camera and apparently a couple of sensors above it. The notch allows Motorola to increase the screen-to-body ratio to the highest level ever of any Moto G phone before it. The phone will measure in at 157 x 75.3 x 8mm though the camera bump on the rear which houses dual camera sensors and dual-LED flash will add an extra 1.5mm with the camera bump making the phone 9.5mm thick. Below the camera bump is the familiar Moto Batwing logo in a circle which will contain the fingerprint reader. According to MySmartPrice, the rumoured specs for the Moto G7 include an Octa-core processor, 4GB of RAM and 64GB of on-board storage. The rear cameras will be 16MP + 5MP, while the front-facing camera will be 12MP. A 3,500mAh battery will keep the phone running all day, and the phone will run Android 9.0 (Pie).

With a rumoured four models of the Moto G series coming, the specs are likely to be variable, but the design language seems to stay relatively the same. No word on when we’ll see the new Moto G7, but we’ll find out soon enough.

You can see the full 360-degree render in this video: