Home Mobiles Pixel 3 and Pixel 3 XL in three colours including ‘Not Pink’... Well, that’s it then. All the hardware details of the Pixel 3 and Pixel 3 XL are officially known, with Canadian carrier Freedom Mobile listing the phones for pre-order on their website, with a bonus Pixel Stand thrown in if you pre-order by October 31.

Some interesting tidbits include that the phones are both IP68 rated, allowing them to be immersed in up to 1.5m of water for up to half an hour. The phones on Freedom Mobile also seem to support all the major Australian LTE bands, with CAT 16 LTE offering up to 1Gbps.

The listing also confirms inclusion of headphones in the box as we’ve been seeing since the leaks began.

Freedom Mobile has listed the Outright pricing for the phones, with the 128GB Pixel 3 and 64GB Pixel 3 XL notably the same price. The full pricing you can see here:

The listings include all the information you need, including the Pixel 3 XL colours which are now confirmed as ‘Just Black’, ‘Clearly White’, and ‘Not Pink’. The three colours are apparently on offer for the 64GB models, however the 128GB models show only ‘Just Black’ and ‘Clearly White’. Still, here’s the renders:

The Pixel 3 and Pixel 3 XL across both 64GB and 128GB both offer a bonus Pixel Stand if pre-ordered prior to October 31st, which gives us the on-sale date for Canada at least. 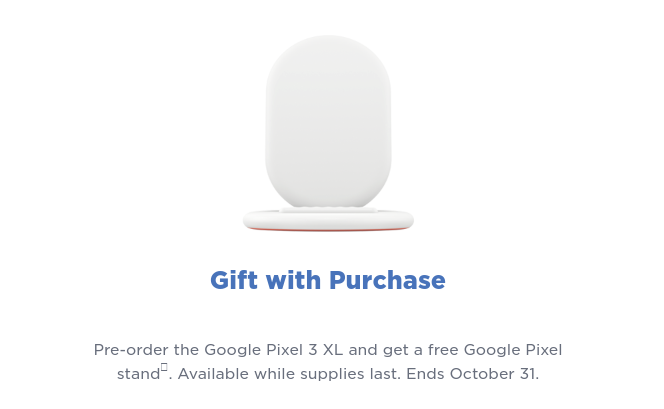 The listings have now been deleted:

I’m really surprised at this. These specs seem closer to a mid range device for the Pixel 3 (bar the CPU). Specifically the screen resolution, RAM and camera setup. I’ve got the original Pixel and was looking to upgrade this year to the Pixel 3, but I’m considering giving it a miss now and going for something else. Hopefully there’s more in store at launch or it’s actually quite cheap.

Pixel 3 it is for me… Especially if it’s OLED screen is a Samsung panel like the pixel 2 … And not a sub-standard LG panel like on my pixel 2 XL..

Going the Pixel 3. Just think the XL is too big and don’t think could used to the notch as it does really stick out, might used to it but go with what I know.

Apparently, you there’s an option to hide the notch if you want (it makes it black around the notch)
I agree that it’s starting to get a bit big though, 6.3″

Funnily enough the Pixel 3 is smaller than the Pixel 2 and has a screen 0.5″ bigger – that’s massive Pixel 2 bezels for you!

The size of the Pixel 3 XL is exactly the same as the 2 XL .. just bigger screen, smaller bezel