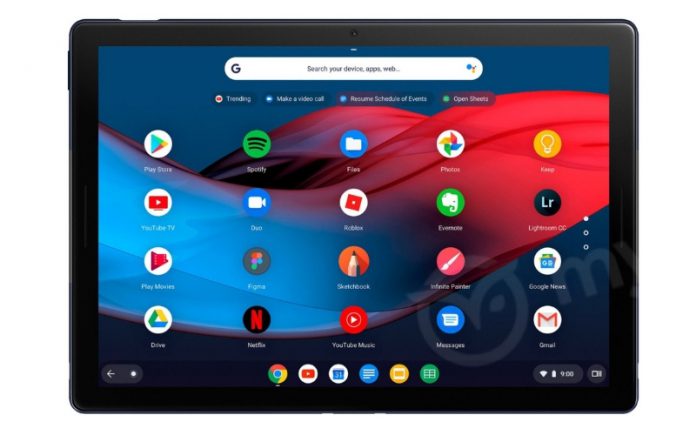 The Made by Google event is almost upon us and it appears to have opened the floodgates on a PixelTsunami as it were, with Evan Blass leaking the Pixel Slate in its keyboard cover.

We saw the Pixel Slate and its keyboard cover leak over the weekend, but as usual Evan has found something new and interesting with the Slate mounted in the keyboard cover.

The Pixel Slate will attach to the keyboard cover via four pogo pins on the base of the tablet, with what we’re presuming is some sort of magnetic attachment. The keyboard cover, with its very Material Design 2.0 like rounded keys, has a folded area at the rear much like keyboard covers from other vendors including Apple.

In the UI on-screen we can see a little more modern UI this time, with the centre-aligned icons on the status bar and the Google Search Pill style box on the empty home screen. That search bar includes the Google Assistant logo, which combined with the Google Assistant key on the keyboard cover shows Google is really focusing on the Assistant more and more in all their products.

We note that there’s still no place to store the Stylus for the Pixel Slate, either in the device (it’s much too thick) or even as a loop attached to the keyboard cover. Google eventually gave away a stick on ‘Stylus Loop’ to all Pixelbook owners last year to address this oversight, so it’s interesting that it hasn’t been addressed in this second generation. We’ll be hearing more about the Google Pixel Slate tonight, and our fingers are crossed that Google will finally bring one of their flagship Chrome OS devices to Australia. Stay tuned for any new information as it comes.