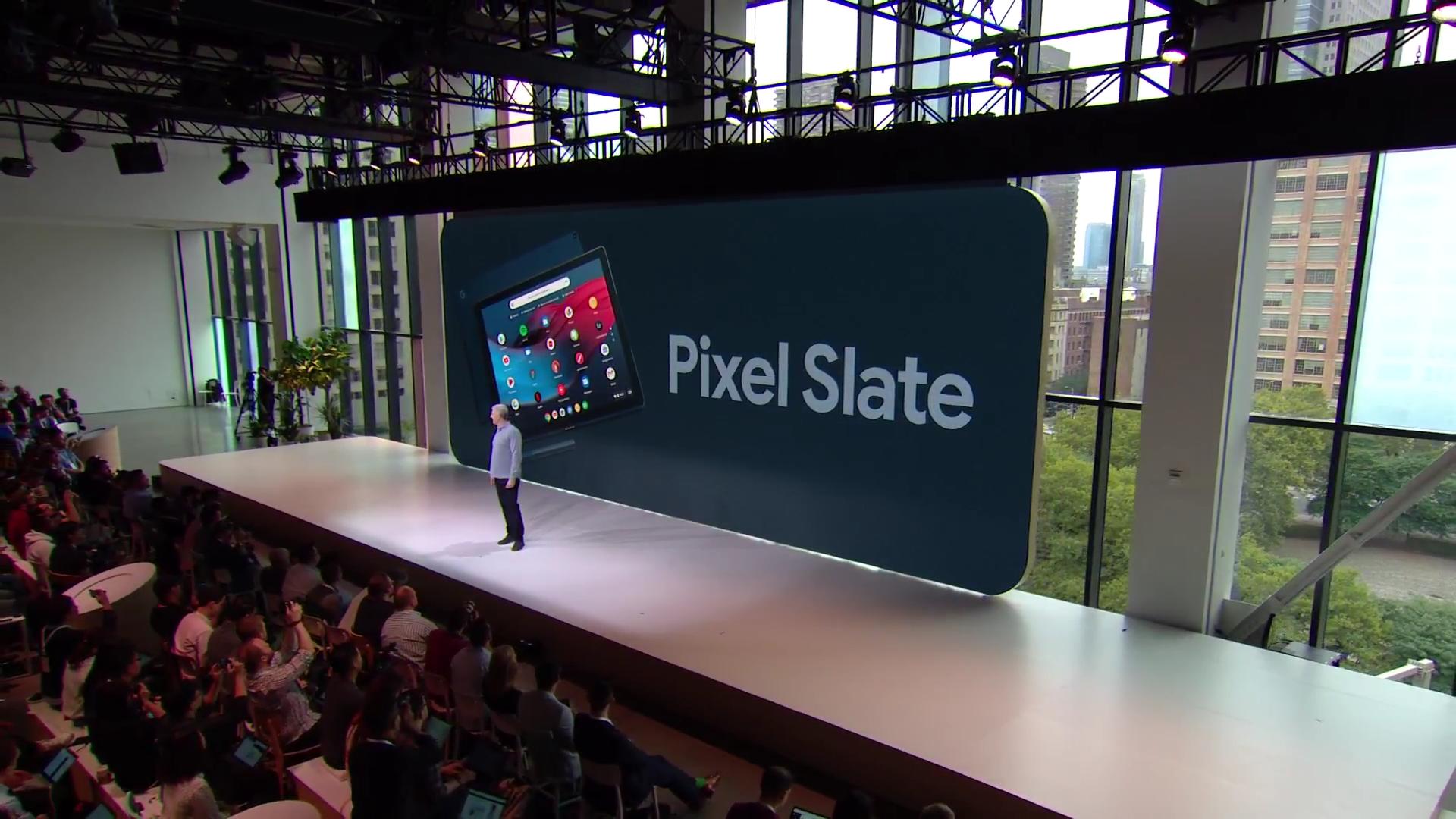 Google unveiled one of their badly kept secrets this morning, the Google Pixel Slate, a new addition to their Chrome OS device lineup. As with the Pixelbook circa 2018 Google have pulled out all stops with the design and specs of the Pixel Slate.

The Google Pixel Slate is a 12.3 inch tablet with a new Chrome OS UI redesigned for a whole new Chrome OS experience — for use as a touchscreen while still providing a full desktop experience. The full desktop experience allows the user to run “full powered” Linux apps as well as developer tools. The new app drawer is also redesigned with the onboard machine learning rearranging the app drawer to suit you and how you use the Pixel Slate.

The design of the Pixel Slate is “thin, light with beautiful lines and stylish edges” while being comfortable to hold. The Pixel Slate comes in a Midnight Blue colour with an accented power button that doubles as a fingerprint sensor. The device has relatively small bezels and is 290.85 x 202.04 x 7.0 mm in size, weighing in at just 721 grams.

Google have not scrimped on the specs of the Pixel Slate with the 12.3 inch “Molecular Display” packing 6 million pixels (3000 x 2000 pixels) resulting in a pixel density of 293PPI surrounded by premium dual front-firing speakers. The Pixel Slate is designed to be the best entertainment experience you can hold in your hands. The device is powered by an 8th Gen Intel Core m3, i5 or i7 Processor or Intel Celeron Processor and starts at a 4GB of RAM and 32GB of storage up to a decent 16GB of RAM and 256GB on storage. Google have stated that no matter the model you purchase, the experience will be the same as the OS experience was optimised with the lowest specs in mind.

The battery is a 48Wh battery which uses a USB-C 45W charge adapter that can also be used with Pixel phones — the Pixel Slate actually has two USB-C ports for charging and 4K output. Google state that the Pixel Slate will provide up to 10 hours of use time on a single charge and with fast charging will provide two hours of use from a single 15 min of charging. The one port missing is a headphone jack. If you want to use headphones with this you will have to break out the Bluetooth headsets (or a USB-C dongle if you can find one that works – possibly the Pixel 3 phones dongle).

The Pixel Slate is also designed to be used to help you stay connected with Duo using the 8MP wide FOV lens that is designed to work well in all lighting situations. The front facing camera is capable of video recording at 1080P at 30fps. The rear camera is an 8MP f/1.8 aperture lens and can also capture video at 1080P at 30fps. Yes, portrait mode is supported on the Pixel Slate, although we still encourage you to use your Pixel phone to take photos rather than a big tablet.

Software-wise the tablet will not just run Linux and Android apps but will also be capable of split screen for those apps and have Google Assistant built into the device. Also built in will be family link, allowing you to set ground rules for your family (or yourself) about when and how the device can be used. There are also do not disturb and night light features. Google have also partnered with Adobe to bring an all new Adobe Acrobat to the Pixel Slate — a version that is “reimagined for Chrome OS”. It will allow you to quickly fill in forms and sign and annotate documents with the Pixelbook pen.

Google have made a point this year of including a Titan security chip in their new devices to allow for added on-device security and storage of sensitive data. One thing missing from the Pixel Slate is LTE – at this stage it appears to be Wi-Fi and Bluetooth only.

Google announced two accessories for the Pixel Slate — a keyboard and a new colour of the Pixelbook pen.

The Pixel Slate keyboard takes all the things that people loved about last year’s Pixelbook keyboard and puts them into a lightweight keyboard (486 grams). With ultra-quiet “Hush Keys” the backlit keyboard is designed to be easily adjustable from each position to switch from laptop to tablet and entertainment modes with a minimum of fuss. The different modes involve moving the back section of the keyboard to support the tablet at different angles but according to Google the folio is “infinitely adjustable”. The trackpad is an etched glass surface which supports multi-touch and gesture support.

It connects to the Pixel Slate with a simple snap on without charging or pairing of the keyboard required. The keyboard doubles as a cover for the device, folding over the back of it to protect it in your travels. Google have also added a Google Assistant button to the keyboard for easy access to their digital assistant.

The Pixelbook pen is the same as last year’s pen but is now available in a new blue colour that matches the Pixel Slate. Once again there doesn’t seem to be anywhere to store the pen, nor a magnetic side to adhere the pen to.

The Google Pixel Slate looks to be a great device but unfortunately Google have ignored the greatest country in the world and at this stage will not be making its way Downunder. It will be available “later this year” in the US, Canada and the UK with prices starting at US$599 for the Celeron processor paired with 4GB of RAM and 32GB of storage up to US$1599 for the Core i7/16GB RAM/256GB storage option. The Pixel Slate Keyboard will be priced at US$199 and the Pixelbook pen at US$99. While the Pixel Slate looks to be an amazing device and several of us are already thinking of how to get it here it is ultimately not available here officially. For those willing to take the risk with a mail forwarded or an online store don’t forget that you will be stung with GST as it makes its way through customs (or by the store if they are officially shipping it here).

The Pixel Slate will be my next tablet, how about you?

I think I’ll order the high end version from States / Canada and take my chances. Looks like a superb answer for my needs / wants. I’ll wait until they’re actually in the market in case there proves to be any issues

This will be my next tablet too. Definitely interested to find out how to obtain the Pixel Slate.

Why does Google insist on giving us double middle fingers when it comes to their ChromeOS devices (first the Pixelbook, now this)?

I support what you’re saying, but equally, market of (at maximum) 25~ million, of which a very, very small number would even consider ChromeOS, much less going and actually spending on it. I’d be reluctant to launch a ChromeOS device in Australia too.

On the other hand, the reason people aren’t even considering ChromeOS is because they don’t even know it’s an option due to lack of marketing. Classic catch 22.

Why are pixelbooks/slates never available in Australia? Are chromebooks so unpopular here?

I’d be interested to see a pricing comparison with the iPad Pro and Surface. Historically, the Pixels have compared pretty favourably in terms of hardware vs price.

At that price they’re on crack. It’s almost like they want tablets to fail on purpose