Home Smart Home and Wearables Around the Home Meet the Google Home Hub, launching in Australia October 22nd and available... After weeks of leaks, Google officially launched the next device in their Assistant powered ‘Home’ line up of smart devices, the Google Home Hub smart display at their 2018 Made by Google Event in New York this morning. Unlike previous ‘Home’ device launches, the Home Hub is heading here almost straight away, launching in Australia October 22nd for $219 AUD. While not the first Google Assistant smart display to hit the market Google’s managed to keep a feature or two up their sleeve for today’s launch.

The 7″ touchscreen display has a now familiar fabric wrapped base housing the speakers, the display is housed in a uniformly while largish bezel without an integrated camera as seen in the numerous leaks. The Home Hub will come in four colour options: Chalk (grey), Charcoal (black), Aqua (blue) and Sand (pink). Feature wise Google has announced ‘Home View’ for smart display, with a swipe down from the top of the Home Hub will allow immediate access to a quick list of integrated smart home controls allowing seamless interaction with deices like lights, door bells, thermostats and more. 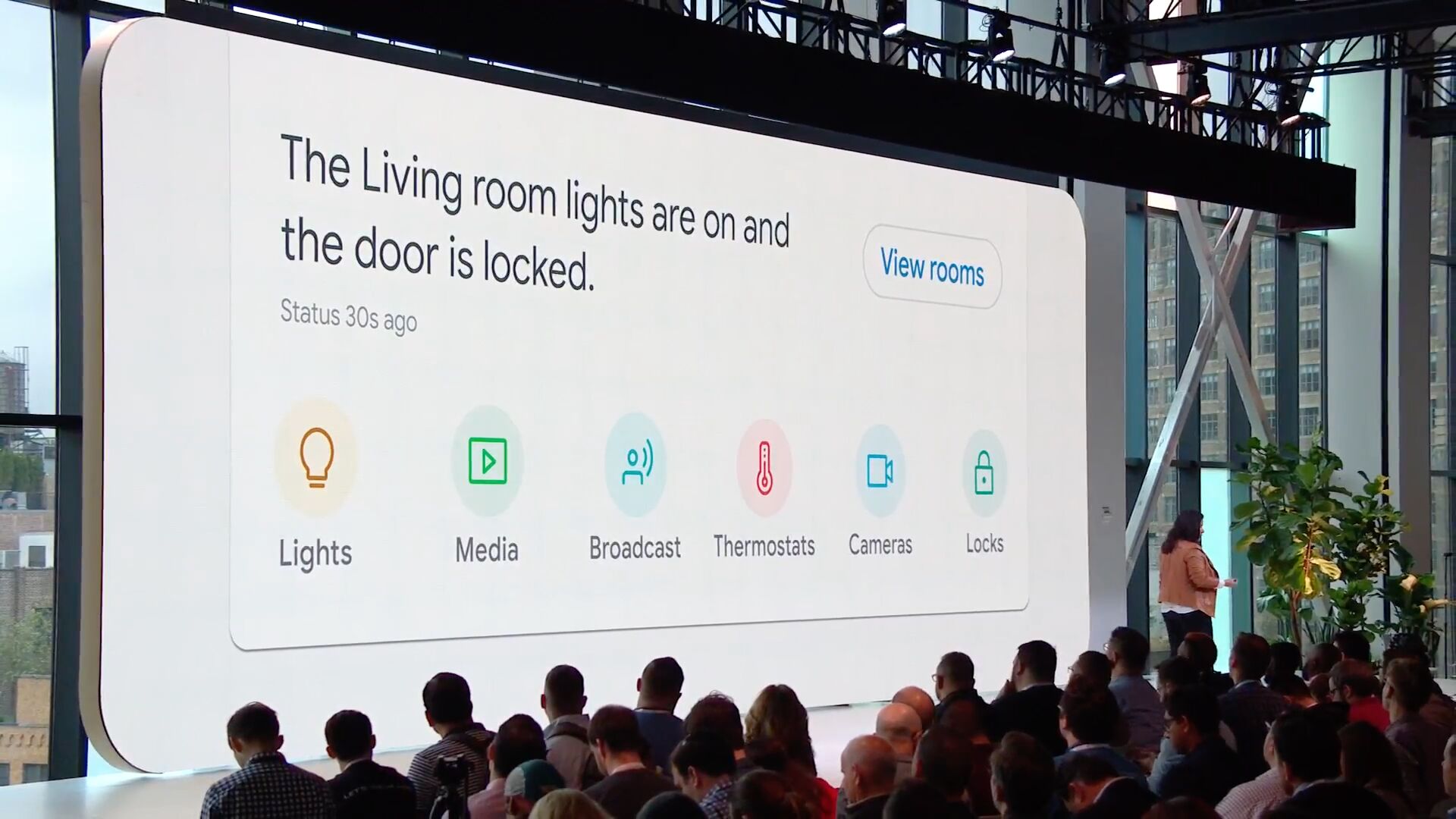 Home View has the potential to finally start to integrate all of the disparate smart home products into a single visual control UI. There was no indication if Home View would be rolled out to other Assistant Smart Displays or even other devices such as Android phones and tablets, though Google has been making moves with the recent re-design of Assistant on devices.

Voice match will allow each member of the family to interact with the Home Hub and get personalised content from their Google Accounts, this is building on Googles aim of everyone having their own personal Google. While we’re talking about families Google has included filter options to ensure your Home Hub is always serving up family friendly content. Downtime Mode lets you set the device to be less intrusive with only notifications for important events such as alarms breaking through.

Being a display first device Google has implemented what they are calling Ambient EQ to inelegantly control both the screen brightness and colour of the display to show “true” image colours that adjusts to the ambient light through out your day, the display can also be set to turn off over night. Unfortunately due to the lack of a camera, there will be no video chat using Due as is included on other smart displays like the ones from Lenovo, JBL, LG and soon Sony. Google says that the lack of camera allows the Home Hub to be placed in more ‘sensitive’ areas where you wouldn’t want a camera like a bedroom.

As with other Assistant Powered smart displays the Home hub is designed for hands free video and image consumption with YouTube and Google Photos playing front and centre to serve up all the content you could want.

Home Hub introduces ‘Live Albums’ to Google Photos, a new feature that lets you create dynamic live albums simply by selecting the people you most want to see photos of. Google Photos will use Machine Learning so that only your best photos show up on Home Hub removing duplicates, under exposed and blurry photos as well as those random shots of receipts, screenshots and the like.

In the US YouTube TV will also be available with buyers in the USA getting 6 months free trial to the service – though here in Australia we will be getting 6 months of YouTube Premium with the purchase of a Home Hub.

Check out the video below for a quick introduction to the Google Home Hub.

The Home Hub will be on sale in Australia for $219 AUD from JB HiFi, Harvey Norman, Telstra, Optus, Vodafone, The Good Guys, David Jones and Big W starting October 22nd or you can pre-order one today from the Google Store with free delivery.

I still think this is a hard sell. I want to watch prime video and Netflix on a screen. Why can it not have apps?

“Home View has the potential to finally start to integrate all of the disparate smart home products into a single visual control UI.” It’s about time. Google is playing catch up to Amazon in this regard, who are well ahead of them with their Alexa integration with other smart home products. Of course, if it requires other companies to also change their products we may still have to wait a little while longer…

Would have to actually agree with you on this point, Google is actually taking its time with things they could easily implement due to the amount of resources they have but still with certain updates – seem to be lagging behind. I have the Lenovo Smart Display and the device itself is great, has an amazing display and speaker but i need the GA updates to roll in quicker lol