Home News and Editorial Pixel Slate could launch in the US on November 22nd – still...

The Google Pixel Slate is a great looking tablet, but it’s definitely not coming to Australia. For those interested in looking to import one though, it appears the Pixel Slate will be going on-sale on November 22nd.

According to a screenshot from Best Buy that Kevin Tofel from AboutChromebooks nabbed before it was changed to ‘Not yet announced’, the Pixel Slate will be going on-sale on November 22nd in the US. This is further backed by the Chrome OS Stable v70 which contains some code for ‘Nocturne’ (the Pixel Slate’s codename) due to hit the stable channel on October 23. 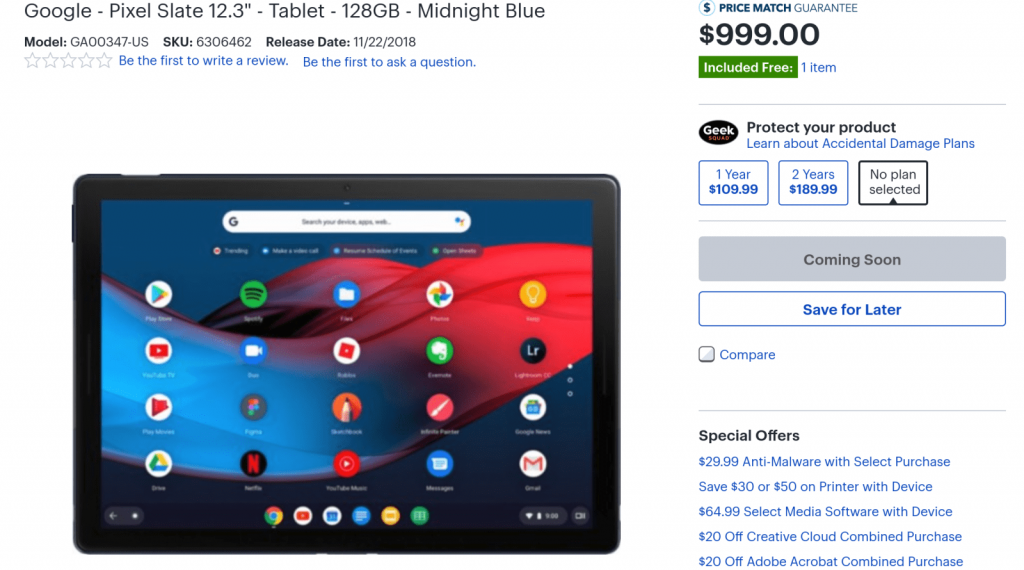 Google hasn’t officially announced a date for the Pixel Slate going on-sale as yet, with their official word saying:

Starting at $599, Pixel Slate comes in several configurations. Pixel Slate Keyboard is $199, and Pixelbook Pen is $99. All three will be available later this year** on Google Store, and at major retailers in the U.S., Canada and the U.K.

While Best Buy thinks that the Pixel Slate could be going on-sale then, the version of Chrome running on the Pixel Slate may be a further indicator. About Chromebooks noted that Chrome OS Dev Channel v71 was running on demo versions of the Slate at yesterdays Google event. As pointed out, the release date for Chrome OS v71 is expected around December 11, so that may be the actual on-sale date as well.

If you’re interested in importing a Pixel Slate traditionally retailers including Best Buy, Amazon and even B&H Photo Video have stocked Google’s Pixelbook previously. Best Buy won’t ship to Australia or to known shipping forwarders and Amazon has been difficult shipping from their US site to Australian addresses since the introduction of mandatory GST collection on all orders. This leaves B&H Photo Video, who has previously been quite good about shipping to Australia.

The Pixel Slate starts at $599 for the Celeron version with 4GB of RAM and 32GB storage and goes up from there. We’ll be looking at importing the Pixel Slate when it starts being listed, so stay tuned.

Just wish that they had lte built in.

Wake me up when they compile Android for it, and halve the price.