If you couldn’t guess, we’re pretty excited for the release of Google’s new Home Hub across Australia tomorrow. It’s the latest member of the Google Home family, powered by Google Assistant and comes equipped with a 7-inch screen to let the Assistant show you answers, controls and photographs.

We’ve been lucky to get our hands on a Google Home Hub just a little early, and thought we should show you what you’ll find in the box when you get it home from the store and tear that shrink wrap off and what to expect as you set it up. 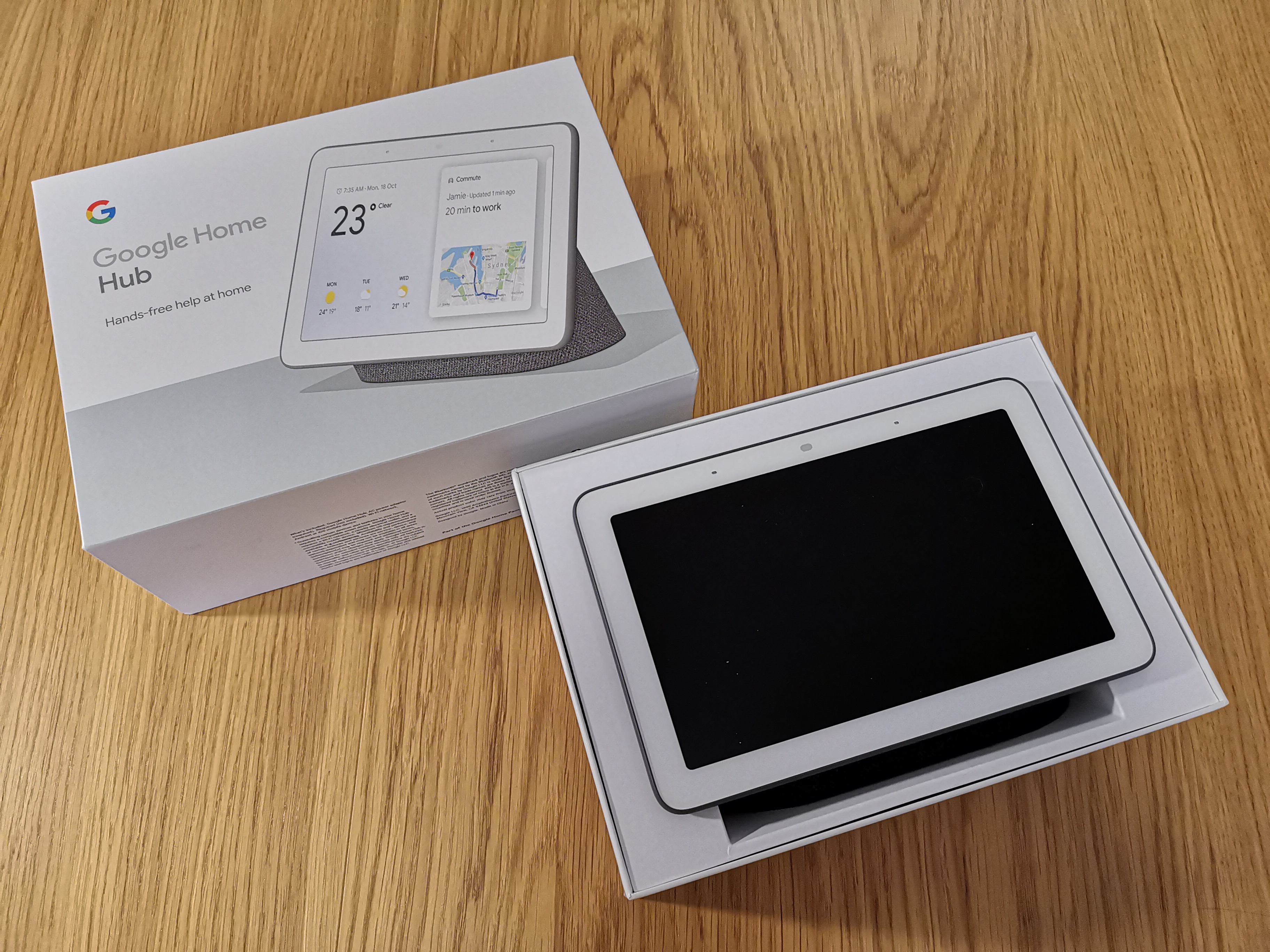 First of all, you’ll find that the box is pretty snug around the Home Hub. It’s a small, cute little display with a fabric-covered base that’s very “Google” – the company likes to put tactile, pleasing textures onto their devices, a trend we saw kicked off with the first Daydream View that launched with the original Pixel.

In the box, the Home Hub sits in a plastic shell that slightly elevates the display while letting the base sink into the box. That elevation is enough for you to get a grip on the device to lift it out of the box.

For its size, the Home Hub has a surprising amount of heft. That’s not too surprising when you consider that the speaker inside that fabric base can pack quite a punch – and we know that good speakers bring some weight with them. The rest of the box is a little light, with most of its depth occupied by the Home Hub’s stand (now removed).

The only other items in the box are a quickstart guide (which basically says plug it in and run the app on your phone) and the power adapter. Surprisingly, the Home Hub doesn’t run off a USB C power as we’ve come to expect from Google’s higher-end equipment – this is a custom molded AC adapter with a familiar-looking G-branded power plug. Setting up Home Hub isn’t so different from any other Google Home device – and it helps that the app has just been given a bit of a makeover to make the process even easier.

Notably, once Home Hub connects to your Wifi, it’ll probably start downloading a software update – that’s fine though, you can continue with setup on your phone while it’s going (setting up voice recognition, room configuration and even choosing which album from Google Photos you’d like Home Hub to use while it’s idle (curiously, this feature was called Live Albums in Google’s media releases, but it’s not branded as such during setup). (apologies for the darkness of the images there)

One of the new features is the ability to manage multiple homes, so I quickly named my apartment and set about moving all my smart devices into it.

So with that in mind, it’s worth asking – where are you going to put your Home Hub? For me, it was a pretty easy decision – I have a Home Mini sitting on the side table in my loungeroom, and that’s now been replaced by Home Hub. You should also be aware that the power cable isn’t that long – probably about a metre and a half. Not short but also not particularly long for a home appliance. You’ll want to locate your Home Hub near a outlet or power board. The plug is also ever so slightly wide and can interfere with the plug next to it. Luckily, I already had a power board in that location as well.

And voila! Home Hub sure looks the part on my side table.

Home Hub’s microphone array can hear you from across the room when there’s not much background noise going on, but in some early tests it struggled to differentiate a “Hey Google” from the nightly news while performing well in the presence of musical accompaniment.

Being a Google Home device, Home Hub also knew how to control the Hue, Lifx and TP-Link Kasa lights and smart plugs on my home network as soon as it was powered up. I did have to juggle the room configuration around a bit though, but that’s on me. If you want to get your hands on a Home Hub, you don’t have to wait – it’s going on sale on Tuesday October 23 at electronics retailers nationwide in Chalk and Charcoal colours, and will set you back a modest $219. If you’re after the more colourful variants, Aqua and Sand will be available from the Google Store exclusively (and you should also enjoy free shipping)

I’ll be taking a deeper dive into Google Home Hub in the next few days, so if there’s anything you’d like to know about Home Hub, ask away in the comments!

Got mine delivered today 🙂

Noticed a ‘phantom touch’ issue unfortunately. Occasionally when music is playing, the ux will indicate that the ‘prev/back’ button has been pressed and the song will go back to the start (or even go one song back in the playlist if right at the start of a track). This is with no interaction from me, obviously.

Curious if anybody else has noticed similar or if I should just ship back. I suspect it may be a hardware issue?

not seen this myself at all, has been good for me.

And does it show timers as well that ive set, how long left etc?

Radio wise depends on the station. For Radio Paradise via tune in I see the artwork and the song name on the display.

You’ve got some weird brackets in paragraph 10. There’s 2 opening brackets and 1 closing bracket…

“… (setting up voice recognition, room configuration and even choosing which album from Google Photos you’d like Home Hub to use while it’s idle (curiously, this feature was called Live Albums in Google’s media releases, but it’s not branded as such during setup).”

Can automation rules be setup? i.e. turn on the lights when a sensor is activated. I couldn’t see native support for sensors in Google Home.

What’s the sound quality like? Is it as good as the home?

Bobby exactly what I want to know.

So sound wise do not replace the home device, sound is not great. Ok for instructions or videos or even podcast news etc but music no.

That’s disappointing to hear, Chris. Especially as Google is actively pushing people towards their new YouTube video-based music service. One might have expected that good sound to go with the screen might have been a logical design feature. Looks like I’ll take my money elsewhere.

If you link it to another system it is as good as your other system but yeah definitely not a replacement for Home.
I moved my home to my bedroom because the mini wasn’t good enough in there, the mini to the bathroom and in there it has more volume and bass due to the enclosed space and sounds really good.

You also only get at this stage the US language voice which gets annoying for me as I am used to the Australian one.

Sitting on par with a Google Home Mini. As a stereo replacement I wouldn’t recommend it. It’s decent enough for the Google Assistant side of things, and as an addition to a multi-room audio setup it’ll do but it’s not a high-end quality music speaker.

– How is the sturdiness of the device if you want to use the touch screen instead of your voice? Is the base anti-slip in design to stop overzealous users (children) pushing the device over or rotating it? – The screen is at a steeper angle than I expected. I suppose there’s no way to adjust it? – Are there any security features (PIN number or voice) to secure personal data like your calendar or photos from visitors or children? -Does it have a stand-by mode (black screen)? -Does it use its own interface to control lights or can you… Read more »

What’s Google doing here?
Google’s other screen devices – like Pixel slates and phones – are aimed at the top end. But this one – the Home Hub – is aimed at the bottom end, and below OEM products from Lenovo and JBL. Home hub lacks a camera. It’s running the cut down Chromecast OS, rather than the Android Things OS the others use.

Les you are assuming a lot there. Cut down Chromecast OS, how is it cut down ? Do you know it inside out to make that comment ? Do you really think that Google would choose something if they didn’t have a good reason. They created a device to do the job they want it to do. it looks good and it works as it should, your perceived lack of quality is more about you than them. It lacks a camera for a reason which I am quite happy with, I don’t need a camera on it, I am much… Read more »