The Xiaomi Black Shark Helo picks up where its predecessor left off. It packs impressive specs including a Snapdragon 845 with dual liquid cooling chambers and a massive amount of RAM — 6,8 or 10GB. The battery is a very decent 4,000mAh but you would still expect that to run down quickly being a gaming phone.

Just as Razer have done with their second gaming phone, the Black Shark Helo has an interactive glowing logo on the back alongside dual cameras (12 and 20MP) with AI scene recognition and a fingerprint sensor. The display is now a 6.1 inch +AMOLED with an 18:9 ratio, an upgrade from the 1080P LCD display in generation one. There are also stereo front facing speakers to produce the high quality sound you hope to hear when gaming. Xiaomi have also included AI screen recording technology designed to automatically identify significant game moments to generate 10-second video highlights for the user to easily share with others. 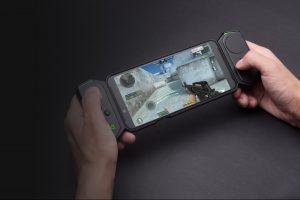 Just as the first generation arrived with a gaming controller, the second generation does too but takes it a step further. Those who opt for the 10GB/256GB version will receive both left and right gaming controllers. Users who purchase the 6/8GB/128GB versions receive just the left controller.

While it is most definitely not going to make it here there are always grey market importers if you want one. Anyone interested?

This is much closer to being something I would look at for sure. I am not sure if it has everything I would want yet but it is much closer and should sell well given the specs. I just hope that this time they have actually done the cooling right like they did with their other more recent models.

Did they not provide any clean straightforward well lit photos of the phone to see it properly?

They might not but I am sure you can find them all over the internet in the next few days when reviewers get them at least.