Home Smart Home and Wearables Around the Home Google WiFi updated with support for the Pixel 3 XL Notch ..... 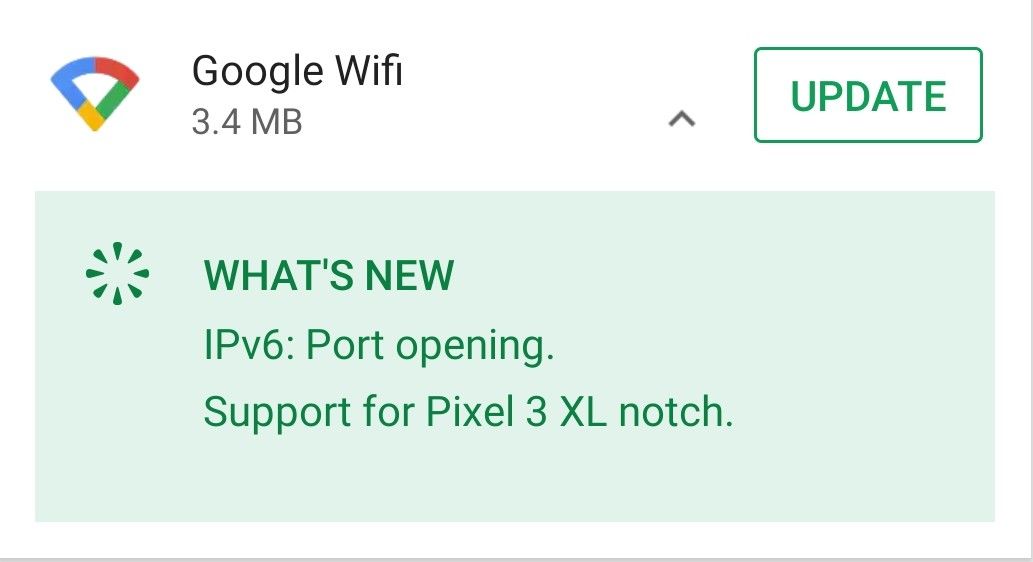 Love them or hate them, notches on premium smartphones are the feature-du-jour at the moment. Google’s Pixel 3 XL notch is so popular that the company has decided to update its Google WiFi products with support for the notch too.

Yes, that’s right. Your Google WiFi might be getting a notch, or something.

Truth be told, we have no idea what this update notification means, or why an app needs to be specifically updated to support the notch on one phone. That we’re aware of, the Google WiFi companion app doesn’t do anything remarkable with the notification bar that would be impacted by the Pixel 3 XL’s notch, but we’re interested to see what this update actually changes, if anything.

The other dot point for this update – IPv6 port opening – is unlikely to mean much to most Australian users, for whom IPv6 isn’t supported by most major ISPs yet. The other issue here, of course, is that Google WiFi’s IPv6 implementation isn’t very capable anyway. Anyone wanting to experiment with IPv6 is much more likely to use a more powerful router.

Let us know how your Google WiFi goes with its new Pixel 3 XL notch update.

Next, people will want a notch on their flatscreen televisions. Aaaarghhh!

Yep +1 for ubiquiti wifi gear. I have a couple of their aps coupled with an Asus router and it goes great.

Google wifi is not great. It can’t handle hi speed data at all, 1 Lan port if you are lucky and the wifi was dodgy for me.

If you have simple devices and are happy with slow wifi then it is good. Post that get a real router. My old Asus router runs rings around Google wifi so much so that I gave it away and went back to the Asus

Google WiFi has its use case, but it’s not a performance wifi solution for every environment. In our apartment, for example, it works great at getting WiFi to every corner. In our old apartment, it didn’t handle the high-speed internet all that well, and a ASUS router (that I remember spending a fair bit on) did a much better job.

If anyone is serious about getting some good WiFi in their place, you can’t go past the Ubiquiti network gear. I’ve never had a consumer modem that can handle the number of devices I have reliably.