When Razer announced their latest smartphone, the Razer 2, there was barely a mention of there latest gaming controller built for mobile phones. There was nary a mention of it here in Australia, but it’s real and it was shown off at PAX Aus this past weekend so of course we went and found it and got the lowdown.

The Razer Raiju Mobile gaming controller is a Playstation-type controller that has an attachment arm for your phone to sit in. It extends to the size of your phone so there is nothing to worry about should you have an over-sized phone. Even with a phone designed for gaming such as the Razer 2 the controller can make playing games an even better experience. The Raiju Mobile can also be used with PC games.

The Raiju Mobile connects to your phone (which needs to be running later than Android 6.0) via Bluetooth or USB-C although at this stage it is unclear how the in-game controls will work and how much the game developer will have to integrate for you to get full functionality.

Unfortunately we were only able to get eyes and hands on with a “generic sample” which was hidden in a plain white box, in a locked cupboard underneath a display bench. The generic sample is apparently identical to the final product and you can see all the buttons on it in the images taken.

The good news is that it will be arriving here in Australia “next month” for a cool $259. While there was no mention of where it would be sold we expect it to arrive on the Razer website, JB Hi-Fi and other gaming retailers such as MSY, and possibly even through Optus where it will be heading as a carrier exclusive.

If you are looking for a certain something to add to someone special’s Christmas stocking this year the Razer Raiju Mobile would be a great addition. My in-house gaming tester is hoping to find one in his come Christmas morning that’s for sure. 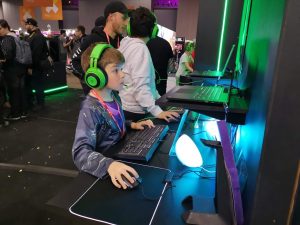 Are they serious on that price tag?
Do they know how much an XB1 controller + clip costs?
Even if it had fancy capabilities like acting as a battery pack, $259 is absolutely ridiculous, that’s more than half a switch