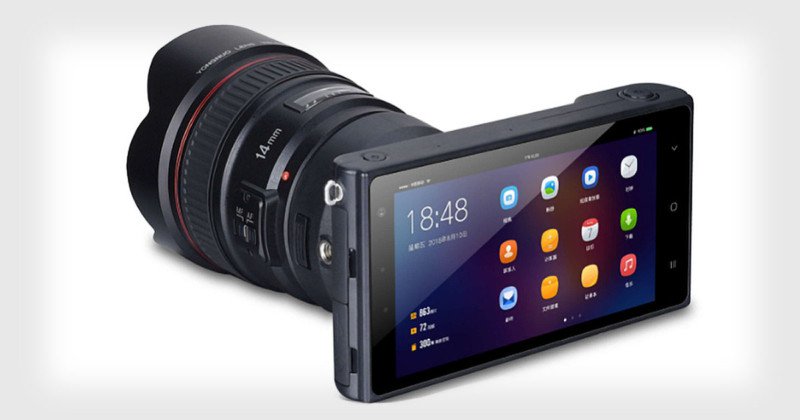 As good as mobile cameras are, they’re usually not DSLR quality. Samsung, Nikon and others have tried the combination of DSLR and mobile device. While those products didn’t perform so well, the idea isn’t finished yet. Chinese firm Yongnuo is developing its own full-featured mirrorless camera, powered by Android.

The YN450 (as it’s currently known) features a 16MP Four Thirds sensor, capable of shooting 4K video at up to 30FPS. Better yet, it’s reportedly compatible with Canon’s EF series lenses. This will undoubtedly appeal to photogs who already own Canon glass, but for newbies it may be equally interesting. Other specifications of note include a 5-inch 1080p screen, Android 7.1 Nougat, stereo microphones for video recording, a huge 4,000 mAh battery and – of course – a headphone jack.

That’s about all we know for now; there’s no pricing or availability just now. For the hard-core photographers, this may prove to be more appealing than a smartphone by itself, and I can see why. One of my bugbears about using a point and shoot camera (or a DSLR) is that it doesn’t fit with my workflow. I have to copy the photos from the camera to my PC, then upload them to Google Photos or elsewhere. As the YN450 is an Android device, this nifty camera combo could upload my photos straight to the cloud, and make things really simple.

What a waste of money this will be!! Keep your phone as a phone and if your passionate about photography get yourself a dslr and learn a skill or too!! How annoying would it be getting calls and notifications while your trying to enjoy shooting!! Phones are not life! They don’t need to do everything, it’s ok to put them down and grab a camera or a book.. even enjoy a drive without your eyes glued to it! People can’t even walk to the supermarket from the car park in a straight line because there glued to their phone.. why… Read more »

I would love to see an android phone running googles own software, imagine a high quality DLSR combined with some of googles software optimisations and post processing…

It’s a great concept, but I fear Yongnuo will muck it up..

To be useful, it would need to have a full-frame sensor. EF mount needs the mount (where you screw the lens on) to be about 4cm from the image sensor. Maybe Canon’s new mirrorless RF mount would be better, which only needs to be 2cm from the sensor. There’ll soon be many more RF lenses on the market, and there are adaptors for EF lenses.

You know what I think they’ll do… make it in the form factor of a phone, but then supply adaptors for every lens type on the market.

If only someone would make a device like this that does full-frame video. We’ve seen the smartphone wipe out the point-and-shoot camera market. Maybe they can try to wipe out the DSLR market too.

They either need to make it really affordable so people can buy a new one overy year, or commit to a really long upgrade process. Panasonic’s otherwise excellent DMC-CM1 barely got a year’s worth of updates

Interesting concept , I cant see it taking off though . i always thought that the early galaxy phone (S3 i think ) with the inbuilt 10 x telephoto lens could have still been a possible device to bring back one day with upgraded camera stuff , because from memory the S3 one was was only so so with the camera tech of the day, and not much better than the standard camera according to reviews i saw . Dragging around a big lens seperately for the smart phone seems bit Meh to me , unless it was like the… Read more »

I am confused. Why would anyone make a camera that uses a micro 4/3 sensor but not use the M4/3 mount but instead use a Canon one for larger sensors?? I was semi-interested before but now if this is true I don’t see how anyone could be really interested in it as the lenses are going to be too big for the body.

Ooh that would be awesome in terms of the immediate tagging and sharing potential! (of high quality pics of course) I couldn’t justify getting the separate Samsung Galaxy Camera a few years ago, but I would actually like something like that now

I wouldn’t have called a 4,000 mAh battery huge, particularly on a camera that is also a phone.

Maybe not huge, but it’s definitely not small. Depends also whether this thing has LTE on board, or whether its WiFi only. No mention in the source article.