If, like us you’ve been using the ‘Now Playing’ app which creates a history of your identified songs on your Pixel 2 phone, then the good news is that you can stop with Google now rolling out the Pixel 3 Now Playing History feature to Pixel 2 phones.

The update, appears to have been enabled by Google via server-side switch has been noted by users on reddit, who shared a screenshot of the Now Playing history feature in action – and it looks just like it does on the Pixel 3 phones. To find the Now Playing feature and the history you will of course need to enable Now Playing detection by going to Settings > Sound > Now Playing. 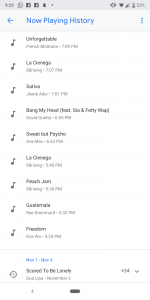 The History feature works just like on the Pixel 3 with a tap on a song bringing up the option to play the song in Google Play Music, YouTube Music or get some info about it in Google Assistant.

There’s no sign of the Now Playing History on the original Pixel, so it may take a little while longer for those users to get it…if Google decides to enable it.