Home News and Editorial Reviews Review: The Fitbit Charge line just got even better with the Charge... Fitbands were all the rage a while back but then came along smartwatches. Now with Apple leading the charge of smartwatches into the fitness space followed by a renewed push from Google the fitband companies are needing to do something to stay relevant with their products.

For Fitbit, the company that is synonymous with the word fitband, that has meant adding smart features to their already feature-packed fitbands. This year Fitbit have not just improved the Charge 2 with the Charge 3 but they have added a host of new features, software- and hardware-wise.

After checking out the Charge 2 it fell to me to determine if the changes FitBit had made to it with the Charge 3 were an improvement or otherwise.

The Charge 3 is thinner and lighter thanks to a new aluminium design while at the same time having a 40% larger display with a greater resolution than the Charge 2. The display on the Charge 3 is not just now touch sensitive but is protected with Corning Gorilla Glass 3.

The physical button on the side of the Charge 2 has been replaced with an inductive button reminiscent of the touch buttons on the HTC U12+. The new inductive button gives the fitband a great waterproof rating and is thus able to be used while swimming. Fitbit have also added in an NFC chip to enable contactless payments with Fitbit Pay (which many Australian banks do support).

On the inside the Charge 3 has had a software redesign with some new additions plus a weather module/widget which is surprisingly good. There is now added notification support for any app on your phone as well as the ability to reply to notifications using quick replies. It would be nice if eventually they allowed voice to text replies rather than the quick replies — maybe in the Charge 4.

The Charge 3 also includes sleep tracking with the use of the new SpO2 for some advanced health tracking. At this stage Fitbit have not made much use of the SpO2 but you can be sure they are working on it at this moment to try and keep up with the new Apple Watch functionality.

Even with the bigger display the Charge 3 is lighter and extremely comfortable to wear. The band sits comfortably on the wrist and with the smaller size of it you can even wear it overnight, barely without noticing you are wearing it. I have often struggled to wear these fitbands overnight but have done so to test out the sleep tracking functionality on them.

The only issue I had with wearing the band 24/7, and which wasn’t because I wore it all the time but more the construction of the fitband. Over the course of two weeks I had the band become detached from the watchface three times. Of course it is easy to reattach and was most likely due to it slipping down too close to my wrist but it does show a small flaw in the design of the Charge 3.

A colleague at work also purchased a Charge 3 special edition and she had hers come off a couple of times too — I suspect that the watch band attachment mechanism is not as robust as a normal watchband and neither of us attached it as well as we should have. This seems to be a compromise from a more permanent band to the quick release, easily interchangeable band on the Charge 3. Since it came of a couple of weeks ago and I made a concerted effort to attach it correctly I have not had the band come off again. 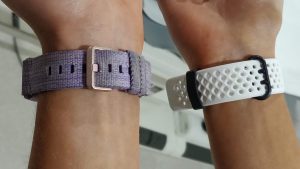 What can it do?

The functions possible with the Charge 3 are numerous and include contactless payments with Fitbit Pay, swim tracking, real time pace and distance (using your phone’s GPS), goal based exercise which can be adjusted according to your goal (for run, bike, swim, yoga, circuit training and more), automatic exercise recognition (so it can start specific tracking), female health tracking and sleep tracking.

While you are unlikely to use most of these the ability of the device to perform them shows its versatility and compatibility for most out there. 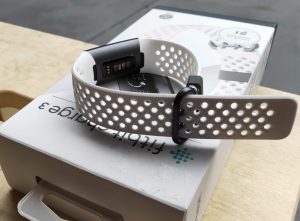 How is the software compared to the Charge 2?

The Charge 3 UI software has had a major overhaul compared to the Charge 2. The button on the side no longer scrolls through the “widgets” but instead is a back button. Long pressing this back button gives you the option to easily turn off notifications and lift to wake- very handy when wanting to sleep with it on and not be disturbed by it. Even with Do Not Disturb turned on on the phone notifications keep coming through for some reason so turning them off on the device is a quick and easy solution.

To scroll through the various functions on the Charge 3 you swipe across the display of it. Once you find the one you want you just tap on it and you then enter into the options for that activity.

The phone software is basically the same as last year, and the same as for the Fitbit Versa which we reviewed earlier this year — and there is nothing wrong with that. The software is well designed and easy to use. The dashboard you are greeted with, which is customisable, shows a lot of information with a single glance. Tapping on each module opens that function and then allows you to drill down further into the information that the Fitbit has collected.

The Charge 3 obviously has more options when it comes to notifications and other various functionality of the device such as the new weather widget but the use and design of the app is the same as before. Check out the following links if you haven’t seen their software before and want to check it out (1,2).

The Fitbit Charge 2 had a battery life of close to five days and you would expect the battery life of a device with a bigger display, more funcitonality and more connections to your phone through notifications to have a shorter battery life. If you did you’d be wrong. The Fitbit Charge 3 is advertised to have a weeks battery life and for me, right out of the box it did. It lasted about 2-3 hours under 7 days and considering I had heart rate continuously on, all phone notifications going to the display and wearing it 24/7 that is extremely impressive.

The Fitbit Charge 3 for all it’s added functionality and sleeker design has an amazing battery life. Unfortunately you do need a proprietary charger to charge the fitband — and a Charge 2 charger will not fit the Charge 3. Fitbit chargers, although they are proprietary, do work amazingly well — they connect to the charging pins easily and securely. Once clipped in place you don’t have to worry about them either not charging or falling off the charger at any time.

If you want a fitness tracker then this is the device for you. It does not have built in GPS but has a myriad of other options that are sure to suit a vast majority of people out there.

The added functionality of the notifications is something that so many fitbands lack but Fitbit have done it and done it well. It is now waterproof such that you can take it swimming — there are not many fitness trackers that can track swimming. Tracking workouts and using it for circuit and interval training was a breeze. Add in a touch screen and an improved battery life and you have a significant improvement over the Charge 2. The device is comfortable to wear, looks good (especially the special edition), and works great. There is nothing to stop me recommending it — and I already have to several people. I can honestly say that I believe that this is the best fitness tracker on the market at the moment.

Hi there I bought the Charge 3 and returned it a week later. Why? The clock faces are disappointing after having the Charge 2. I found it so disappointing that it was hard to see the details on the clock face. That it does not have the features of date, time,steps and HR, which I love about the Charge 2. One day it registered that I had 2.24 kms, nope it was driving as I actually spent most of the day in ER, never had that happen with my Charge 2. There is a Fitbit Community list that 100s or… Read more »