Home Mobiles Android OS and Updates Nokia 8 Sirocco owners about to receive a taste of some pie,... When Nokia made the decision to make every single one of their phones run Android One or Android Go it was expected that this would lead to fast Android version updates. This expectation has proven to be true and this time it is the Nokia 8 Sirocco’s turn.

HMD has confirmed in a press release that the official Android Pie update is rolling out to the Nokia 8 Sirocco making it the 8th Nokia smartphone to be updated to Android 9.0. It is strange that this was now the first phone to receive the update given it is the highest specced phone — maybe Nokia rolled it out to whichever phone had the most users? 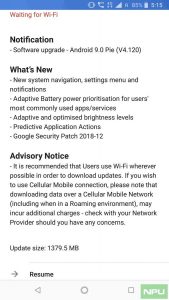 Of course being Android One, the Nokia 8 Sirocco will receive all the Pie goodies such as the new gesture-based navigation, adaptive battery and brightness and more. The update itself is a decent 1379.5MB so unless you have a lot of data, and probably most of you do these days, download it over Wi-Fi.

If you own a Nokia 8 Sirocco start hitting check for updates and let us know when you get your Android Pie.

I received the Android pie update in August of last year (pixel 2 xl). Though I concede that Android pie is probably running on less than 2% of all Android phones, half a year is not a great time frame for receiving an update.

This is a major problem with Android: the fragmentation of os versions still running on the platform.