Home Mobiles Samsung shows off the foldable Galaxy phone and reveals a timeframe for... 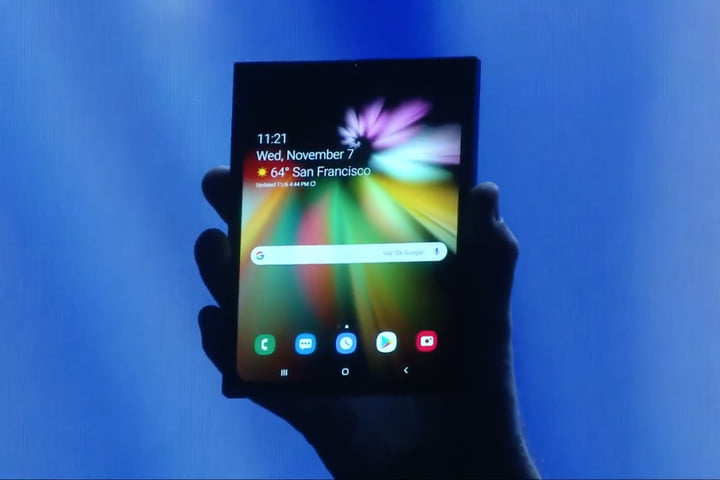 Trade shows such as CES have a lot going on out on the floor of all the booths but the really interesting stuff often happens behind closed doors. At CES this year Samsung have demonstrated its foldable smartphone to a select few people.

According to the Korean Herald Samsung “showcased” a near-final prototype of the new foldable smartphone yesterday in Las Vegas, but only to a few people, behind closed doors. One of these people, “a high level executive from a customer of Samsung”, revealed a few details including that the phone will not show any crease after being bent shut — the one shown off at CES DID leave a crease but apparently this will be fixed in the final version.

Also no crease is left in the device, folding the device totally flat will apparently break the display — no sitting on this one when closed. When folded the sides remain “slightly lifted” and apparently does not feel thick but instead allows a “stable grip”.

Another executive who saw it also said that the Samsung foldable smartphone is “specialised to multitasking” and is best suited to someone who has both a smartphone and a tablet.

When quizzed about a timeline for released Samsung’s director of Product Strategy and Marketing, Suzanne de Silva, told Digital Trends that the phone would be released in the first half of this year — will we see it half way between the S10 series and the Note 10 series, or just when it is ready?

Of course all this new technology will come with a decent price tag. According to one anonymous tech industry executive due to its latest flexible display and battery technology the Samsung Galaxy foldable phone will be sold at more than 1.5 million won which with a direct conversion puts it in the vicinity of AU$1900.

It looks to be an interesting year for lovers of smartphones with some great innovations on the way. It will be interesting to see how the companies handle not just the hardware of foldable smartphones but how they will be able to make Android transition between the various stages of folding and opening.

Who’s up for a first generation foldable smartphone?

With Google never having pushed app devs to make their apps properly support tablets, or landscape, seriously, what is the point of a foldable screen small tablet size screen device like this?