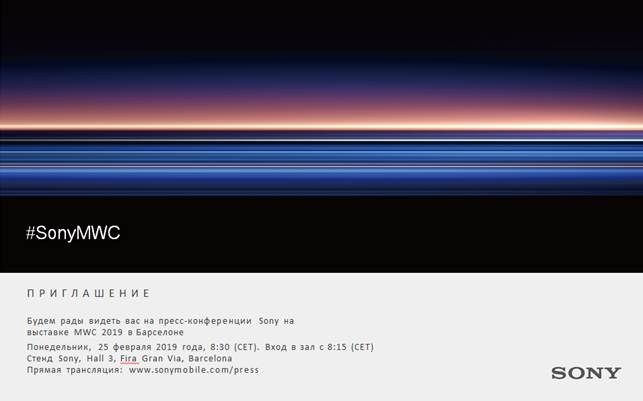 The upcoming 2019 mobile phone announcement season traditionally kicks off at MWC (formerly Mobile World Congress). While we’re pretty sure Samsung won’t be announcing its flagship at the show, it appears Sony will be with press invites to their MWC event heading out now.

Invites have been sent out to both Russian and Italian media, with Sony’s event set to take place on Monday 25 February 2019, the first official day of MWC in Barcelona, at 8.30am CET – that’s 6:30pm AEDT on Monday Feb 25th for those here in Australia.

The invites, while colourful and abstract, may actually hint at the colour options we’ll see for their 2019 range of Xperia handsets. While we expect Sony to announce their new XZ4 series of phones, there may also be some mid-range devices like the Xperia M or XA series as well.

Like previous Sony announcements, the event will be live-streamed, though Sony hasn’t provided a link to it as yet.

Ausdroid will be live on the ground in Barcelona to cover all the announcements and we’ll definitely be there at the Sony event to see what they have to show off.