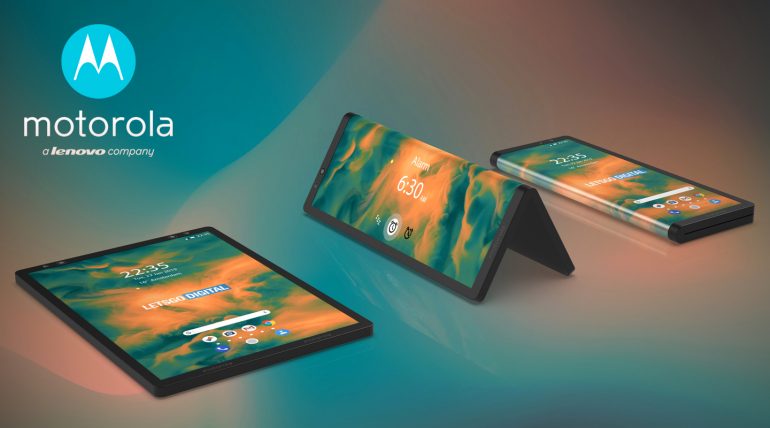 Foldable phones are all the rage this year it seems with every company seemingly working on one. We know that Samsung have been working on a foldable Galaxy X but lately we have seen other companies’ plans for their own foldable phones revealed. Today we see Motorola and Xiaomi details leaked.

Motorola are apparently working on two variants of the foldable phone, one that the phone folds on the inside and one where it folds on the outside. Based on drawings within the patents for the outside folding phone LetsGoDigital have created some 3D renders of what one of Motorola’s foldable phones will look like. The idea of the fold outside phone is that only a single display is required as when the phone is folded in half to be the size of a normal phone the display is still visible.

Xiaomi have gone one better and revealed the phone themselves via a Weibo post. Xiaomi co-founder and president Lin Bin has posted a video of him using the new Xiaomi foldable smartphone and it is very detailed. He not only showed off the phone itself but detailed a few of the technical details they had to overcome to produce this foldable phone including “flexible folding screen technology, four-wheel drive folding shaft technology, flexible cover technology, and MIUI adaptation”.

At this stage the phone is still an “engineering machine” — ie. a prototype not in production yet — but from the video you can see that it seems to be fairly close to fully functional. There is of course a lot of the OS we cannot see in the video but the basics of the phone seem to be functioning perfectly.

Check out the video below and let us know what you think in the comments section.

Are you interested in trying out a foldable smartphone or will you be waiting for the technology to mature a bit more before dipping your toes in the foldable waters?

Ugghh… plastic screens!! Until they develop a plastic that actually feels like glass ( some polymer tech that transitions from maleable when the phone is in the process of folding…. to hard once it is in place – based on electrical charge or the like ) , I don’t really think these will be “great” to use…