Samsung have been making some good looking watches in recent years with varying levels of success. Last year they released the Galaxy Watch, a great looking smartwatch which functions as well as any other non-iOS smartwatch. Now they appear to be set to announce a sports version of the Galaxy Watch at the Unpacked event in San Francisco next month.

In the past couple of days the Samsung Galaxy Sport smartwatch has appeared on various regulatory boards’ websites. First it was see on the Russian EEC certification that was spotted with the codename “Pulse”. Following EEC it was then noticed on the FCC database with the codename SM-R500 which revealed a few details. Lastly it appeared on the Korean NRRA agency’s website with the same codename as the FCC website.

The details revealed by the FCC website are small but confirm that it will support Wi-Fi 802.11 b/g/n and of course Bluetooth (version supported unknown). Other specs are based on rumours but it is expected to run Samsung’s Tizen OS and include 4GB of RAM and be available in Black, Silver, Green and Pink Gold colour options. There is also rumoured to be Bixby support built into the watch including Bixby Reminder support. 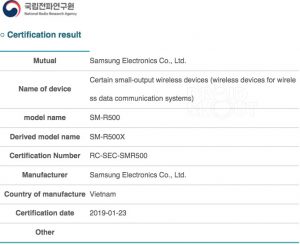 The Galaxy Sport is also expected to be charged via wireless charging as a wireless charging device for the smartwatch has also appeared on the FCC website. The product name of it is “TX PAD for Pulse” which is a fair giveaway of what it is for. The charger will only be available in a black colour.

The Samsung Galaxy Sport is expected to be announced at Samsung’s Unpacked event in San Francisco on February 20 but with MWC starting just days later Samsung may hold off announcing the smartwatch until MWC to make their own splash there amongst all the other mobile device manufacturers. Either way we will be all over it so stay tuned to Ausdroid if you are interested in the Galaxy Sport smartwatch.