The new Vivo Apex 2019 was announced in Beijing this evening and it has some amazing innovations and some spectacular specs which will hopefully arrive in a production Nex phone later this year. Most of the below has been translated by Google from Weibo but has also been translated by a friend (thanks Jade) of Ausdroid who is of Chinese origin.

The Apex 2019 was expected to arrive as a single unibody phone without a single port or button in sight and that is what occurred. There is no volume buttons, not charging port, no speaker grilles, and no headphone jack. The phone is a single “super unibody” design entirely covered in glass.

The front display is full screen 6.39 inch display with 2340 x 1080 resolution and not a notch anywhere to be seen. Powering it is a Qualcomm Snapdragon 855 paired with a massive 12GB of RAM with 512GB of onboard storage.

Last year Vivo solved the front facing camera with a pop up camera. This year they appear to have nixed the front facing camera entirely. Instead you are seemingly meant to use the glass mirror-like finish on the rear and the rear 12MP and 13MP dual camera setup. The rear camera is also inset into the rear of the device making for a flush back of the phone — no camera bump here.

The front earpiece is solved with Body SoundCasting technology (on display sound). The lack of speaker grilles has not stopped Vivo putting speakers on the rear of the phone with what they are calling a zero-hole speaker using the same technology as the sound production for the earpiece.

The lack of a charging port is solved using magnetic pogo pins on the rear which are used for both data transmission and charging the phone. The magnetic nature of the pins means that you “don’t need to look of feel for the port to plug the cable in”. The volume buttons and power button are replaced with double sensor hidden buttons which use a combination of capacitive touch and pressure sensing.

Another big surprise was the 5G support that will arrive in the Vivo Apex 2019 making it the first fully functional 5G mobile phone. There are also associated graphite heat sinks and liquid cooling technology to deal with the extra heat produced by the 5G antenna. 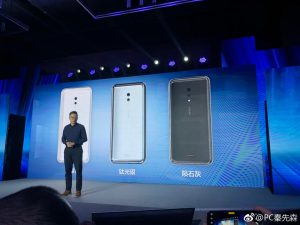 Of course Vivo do not sell their phones here in Australia but then neither do OnePlus so there is nothing stopping you getting one. At this stage not all the specs are known so stay tuned for them and as for the pricing and availability that is yet to be announced as well.

Hopefully it won’t be too long before other phone adopt these innovations in the Vivo Apex so that we can easily enjoy them here in Australia.

Source: Weibo.
Thanks: Jade for the translation.

Looks amazing. Plenty of interesting changes, although I’m not sure about the lack of front facing camera The design of this phone means video calling is impossible, for example, if you wanted to see and be seen.