Home Smart Home and Wearables Around the Home Save $50 Google WiFi via the Google Store, or save up to... 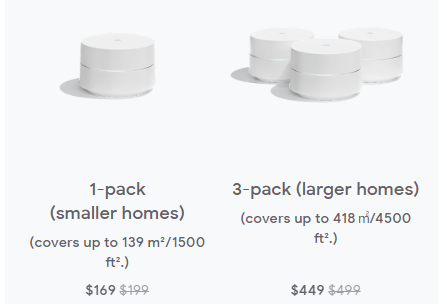 The good news, for your mum and everyone else, is that Google WiFi is on sale at the moment, with up to $30 off the price of the single unit, and a $50 saving on a 3-pack.

For just $169 (or $449 for the 3-pack) you can get the easiest WiFi router to set up in your place. I’ve been using Google WiFi personally since it was released in Australia, and it’s taken our home internet from a constant frustration to something that just works, all the time every time.

The deal is only available on Google’s Store at the moment, though we note that Google WiFi does occasionally go on sale elsewhere as well. If you’re really angling to set up some mesh networking this weekend, head into your favourite retailer and see if you can talk them down to matching Google’s online price.

There’s no end date specified on the sale, but these things don’t usually last forever.

Officeworks have had them as cheap as $145. Also JB.

New unit due at Google IO?

Kinda wonder if Google could merge the Google Home and the Wifi into one unit.

Handy timing. I was just saying I needed to add another unit to my network. I have been using it since 2017. I bought a couple of units in the UK – 3 days before they announced the Australian release! Looks like I’d better get off to the Google Store.