MWC is now less than four weeks away, and so we’re starting to get a pretty good idea of what’s coming up at the show. Overnight, we’ve seen the press invite for HMD Global’s event leaked, where the company is widely expected to announce the Nokia 9 PureView, as well as something else.

HMD’s event for Nokia will be held on 24 February, the Sunday before MWC 2019 officially kicks off. This puts the event squarely in “Press Day”.

What will HMD be announcing?

HMD isn’t leaving us with much doubt, with the company’s own Chief Product Officer Juho Sarvikas tweeting about announcements, and giving us hints of what’s to come.

The image shared shows a number of rear cameras, the hashtag “#Coolnewstuff,” and the date and location of HMD’s MWC event. Brightened up, you can see that there’s four lenses shown (and a flash), which very neatly fits the penta-lens Nokia 9 PureView rumours we’ve seen previously.

Not all that much is known about the Nokia 9 PureView, but likely it will continue the trend of using Zeiss Optics, and offer a bloat-free interface thanks to Android One. Previous rumours have referred to an in-screen fingerprint scanner, a Snapdragon 845 Processor, 6GB of RAM, 128GB of internal storage, wireless charging, and no notch.

The second teaser gives less away. 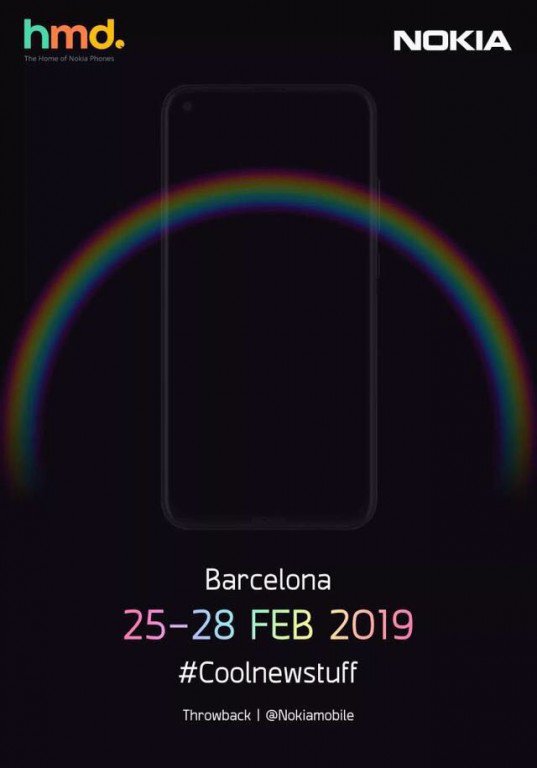 Well .. who knows? It appears to be a smartphone with a small hole in the front display for a camera. Beyond that, it gives away little, but this image also aligns with past rumours of a mid-range phone featuring a rear fingerprint sensor, USB-C port and headphone jack. Beyond that, what it is – or what it might be called – are anyone’s guess.