We heard last week that the Instant Tethering feature currently found on Google’s own Pixel Chromebooks would be expanding to more devices and it looks like it’s happened. Instant Tethering allows you to pair your Chromebook to a compatible Android device and use the data connection, unlike hot spotting however once you’ve set it up is automatically happens in the background.

Details on which Chromebooks are compatible are hard to find but it seems the feature is rolling out in Chrome OS version 71 and up, so if your Chromebook is running the latest version of Chrome OS you might be in luck. Finding a compatible Android phone is easier however. Technically you need an Android phone running Android version N-MR1 and up. At the time of writing that included the following devices. 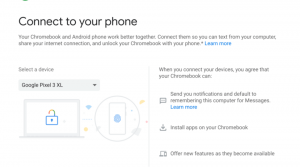 However for future reference the list can be found here. The’s a solid list of current devices and likely covers a sizeable part of the premium, Android install base. With Chromebooks representing a great value for money option it will be good to see Instant Tethering roll out to lower end devices as well.

Google’s Better Together strategy to bring Android and Chrome OS closer together is a positive step in our estimation, with Instant Tethering, SMS, Family Link and device unlocking all seamless working between the two ecosystems.