Home Mobiles Samsung may be looking to kill the notch with an S Pen... When you think of the Samsung Galaxy Note (phones or tablets) one of the biggest points of difference for the range is the S Pen and the functionality it offers users. With each iteration there is changes and improvements to give higher levels of functionality eg. The Note 9 has Bluetooth S Pen which opens controls for camera, slide shows and a range of other possibilities.

That is set to move further in the future with a patent approved to Samsung allowing the S Pen to hold a camera within it including optical zoom which potentially removing the need for a front facing camera and killing the notch!

There are further references to tech such as notebooks, phones and monitors which lets us know that there’s more to come from the S Pen and very soon. 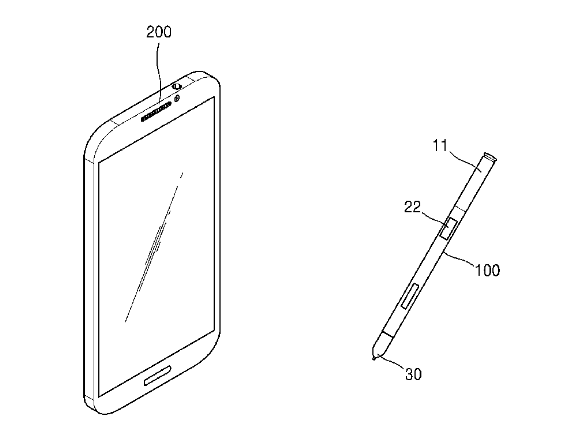 The electric pen device 100 according to an exemplary embodiment may be used by being mounted on electronic devices, such as smart phones, notebooks, or monitors, may input information or transmit a command to the electronic devices, and may include a camera 11 having a zooming function.

Samsung who are known in recent years for producing devices with outstanding camera quality, have noted in the patent that digital zoom is inferior to optical (perhaps suggesting there will be some optical zoom capability) and direct reference to externally controlled sensor which could be a simple as a button on the pen or other unnamed technology.

Or we could just ditch the selfie camera altogether. I don’t need one. Give me a bezel-less phone with no notches or cutouts and just a camera on the back. I was never one of Carly Simon’s lovers

You get a patent for that?

Here are some future possible patents

Loos with cameras on them

Steering wheels with cameras on them

Fake fingernails with cameras on them.

Never would have thought that , could be very handy though .
Sounds a bit James bond when you think about it 😀.