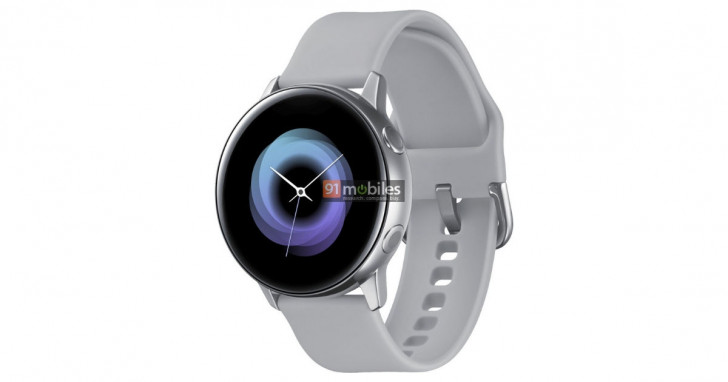 Additional details about Samsung’s refresh to last year’s Gear Sport, the “Galaxy Watch Active” have surfaced overnight with a report from SamMobile claiming exclusive information, and confirming some previous speculation.

It seems that the newly branded Active watch will not feature Samsung’s well-regarded bezel ring for navigation. Samsung has also reduced the size of the display down to 1.1-inches (from 1.2). The screen size change likely won’t make a huge difference in perceived screen real estate – and will hopefully shrink the diameter a little – but the lack of rotating ring for navigation is a disappointment.

Other specs include a slightly smaller 236 mAh battery, wireless charging, Bluetooth 4.2, NFC for Samsung Pay, and WiFi. It’s said to be run by the company’s own processor (a dual-core Exynos 9110) and feature 4GB internal Storage.

Along when the slightly smaller screen over previous rumours, SamMobile claims an increase in thickness to 13mm (up from 11.6mm).

Being a Samsung wearable, it will all be powered by Tizen, not Wear OS, and there are further rumors that Samsung may be bringing Bixby to the device.

Samsung’s previous offerings in sport wearables have gone over well, and if you’re in that camp then this could be an exciting update.

I think this will be a replacement for gear fit series.