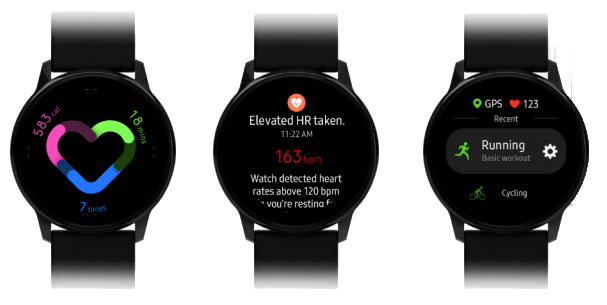 With the Unpacked event just a week away, Samsung has seemingly released its marketing images into the wild. Detailed leaks revealed overnight show off the new Samsung Galaxy Watch Active, and importantly, the new One UI design which looks pretty cool.

SamMobile first showed off the images overnight, giving us our best look yet at the new watch itself, as well as the new software it will run.

The new watch layout is very strongly Tizen, but with clear enhancements to make things a bit more visually appealing. There are several new watchfaces, including many which focus on health data (given the watch’s health focus).

There’s also further details of the workout features which will be built into the Samsung Galaxy Watch Active. There’s continuous heart rate monitoring with notification when thresholds are exceeded (i.e. you’re over-exerting yourself). It will also monitor activity and prompt you to get up and move if you’re sitting still for too long.

Overall the new One UI design for Tizen looks really good, and it cements in my mind that – at the time of writing – Samsung is making one of the better smartwatch interfaces, and the Galaxy Watch Active is only going to take that a step further.

While the Samsung Galaxy Watch Active will launch at Unpacked 2019 mid next week, we’re expecting it to be on show at MWC 2019 as well, where we’ll take a closer look and let you know how it feels on the wrist.

I have just convinced Samsung to provide a *full refund* for my 6month old Galaxy Watch 4G. Heartrate has been broken since the launch and also affecting all regions where they sell it.
I can’t wait to to see if after two years of people reporting HR monitoring (and other) issues) across two different models, Samsung has finally fix this *major* bug.

With the age old question of: “Is a wearable right for you?”

The only answer that really makes sense, to me, is: ‘Depends on the battery life.’

I have a Galaxy Gear and the only reason why i’m not using it is battery.

Any news if they will roll out the new UI to the Galaxy Watch?