A few days ago based on a leaked video we reported that the ultrasonic in-display fingerprint sensor would not work with glass screen protectors. Today we have seen a leak that shows that the official Samsung screen protectors will work, although they do not appear to be glass.

The issue appears to be with the ultrasound waves not being able to be transmitted through air (which is why you need to fill your bladder for a pelvic ultrasound and you cannot do an ultrasound of a normal, non-fluid-filled lung) and many protectors will leave a small amount of air between the glass protector and the display making the fingerprint sensor inoperable.

Today a leak has revealed the official Samsung screen protector and while it is not glass it does not have a cutout for the fingerprint sensor and thus MUST work with the sensor. The protector is the inferior plastic material which does not feel the same as a glass protector – although to be fair I know some people prefer the plastic due to the better fit on the curved display of the Samsung devices.

Some folks thought the #GalaxyS10's ultrasonic finger print reader might not be able to deal w/ screen protectors and made up weird things like the need for a cutout. All of that seems pretty much BS as Samsung sells its own screen protectors. Without fingerprint reader holes. pic.twitter.com/hPw6brxiqv

Of course the image also shows the different cutouts for the front-facing cameras as well as the bending screen protector. Rumours have been surfacing lately that the Galaxy S10 phones will arrive with the screen protector already installed, something many other manufacturers already do.

If you prefer a glass screen protector there are some manufacturers already claiming that their glass protector will work the fingerprint sensor due to some form of adhesive technology to fill in any gaps underneath the display. You can bet that there will be more manufacturers working on protectors such as these so you would hope the price drops from the US$60 for a pack of two these are expected to sell for. 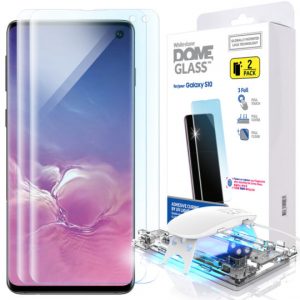 We will possibly see more on Thursday but I suspect Samsung won’t come out and say it that Unpacked and we will have to instead wait until we see some hands-on reviews before it all becomes clear. As a fan of glass screen protectors I hope that manufacturers can make a decent one for this phone.

Which screen protector do you prefer? Glass, plastic or au-naturel?

I won’t need a screen protector if my screen is shattered after a drop… plastic probably won’t cut it.