Home Mobiles MWC 2019 – Hands on with the Nokia 9 Pureview The Nokia 9 is one of the more interesting releases at MWC this year, not because it’s better or worse than many of the other devices but because of its big point of difference – the 5 camera photo capture.

The reality is that this huge capability of the Nokia 9 in terms of image capture is what is going to get the attention from most users, but there’s a lot to like about it besides that.

The first impression of the Nokia 9 Pureview is very good with an easy on the eyes 6-inch screen that pops even under the harsh lighting conditions of the display stands on the show floor.

We’ve already covered the specs of the device and camera, but what does that all actually mean for users? 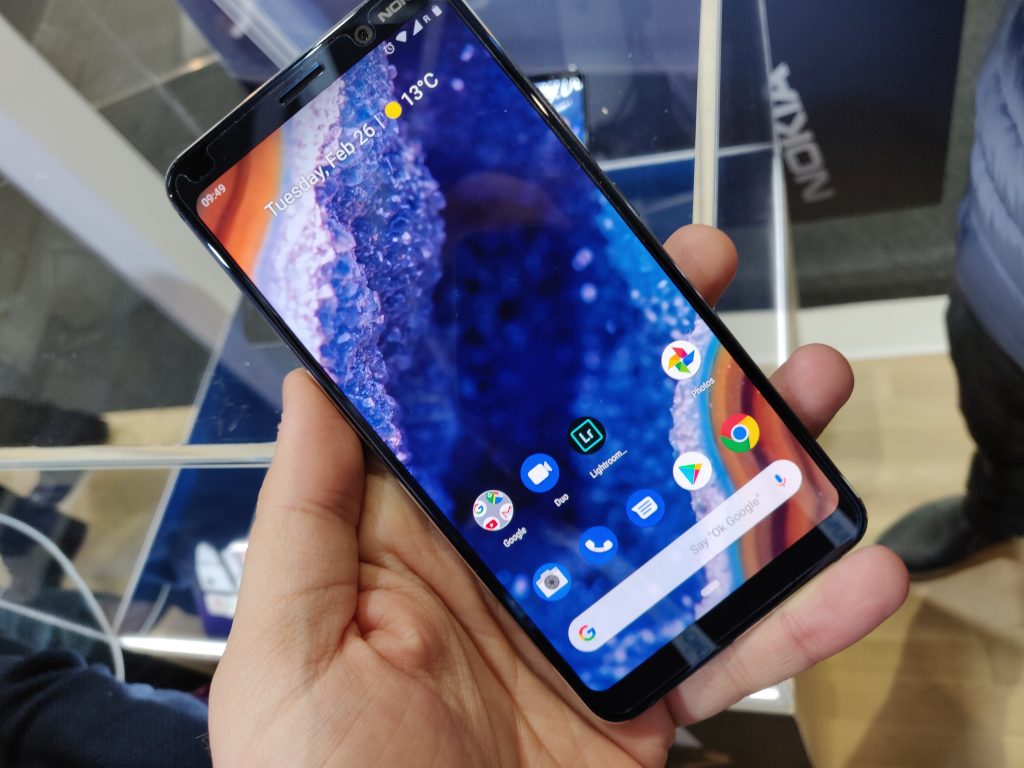 Having made the decision to stick with the pure and stock Android system noting that they keep it “Pure, Secure and always up to date”, Nokia have given themselves a real advantage over others in there market who chose to customise Android as there is no adjustment period to adopting a new Nokia phone.

There are no specific behaviours to learn and no intrusive bloat to the OS. What this means in very simple terms for users is that as an overarching theme, you’re looking at a very easy to navigate and use device that is extremely responsive.

It’s a really clean looking device with a lovely Midnight Blue but for the obsessive cleaners out there, the colour of the device and glass cover leads to the device being somewhat of a fingerprint magnet. Even just in and out of your pocket would probably create unsightly smears if your phone isn’t clean when it gets dropped in your pocket.

The Nokia 9 runs on a Snapdragon 845 (a not-insignificant step down from the current top of the range 855) processor with hexagon DSP (Digital Signal Processing) that manages heavy processing. The IP67 rating gives users the security of knowing if they do happen to drop the device in a bucket, get it wet while doing the dishes or other minor incidents that your device is extremely unlikely to suffer any adverse effects.

The screen is stunning and does an outstanding job of displaying the photos you can capture on the device as it’s a 6 inch QHD display (2560 x 1440) OLED with an in-screen fingerprint reader but doesn’t have the “notch” that has been common among the major manufacturers in recent times.

You’ll be working with 128GB of storage and 6GB of RAM which should keep your phone running well throughout the day, even through some of the high processing loads and the multitasking that users subject their phones to on a daily basis. To keep your phone running there’s a 3,320 mAh battery that will see the a large number of users through a normal day but heavy users will probably struggle to see the day out (normal for most phones in the current market).

External connectivity is another of the contentious points for a lot of users, so the USB Type C charging and data will be an expected option on a phone of this calibre. Probably the bigger point of note is the absence of a headphone jack, but this is quickly becoming less of an issue with the increasing dominance of wireless headphones.

Let’s look at the cameras, all 5 of them

This is huge for camera phones and pushing the envelope. Nokia have 5 cameras built in to the Nokia 9 which work together to capture amazing images. 2 capture images in full-colour RGB and 3 in monochrome. The 3 monochrome sensors give the Nokia 9 huge light capture the capability, 2.9 times more light in fact which gives the capability to capture more, in all light conditions.

Pro-mode which is the feature act for the Nokia 9 cameras where many of the camera settings such as light frequency, focal depth, contrast and light saturation can be adjusted. This is achieved by their amazing computational image processing which fuses the 5 images together to give a huge capability for adjustment. Unfortunately with a queue forming behind me for hands on time with this device, I was somewhat rushed to finish up and move on. The initial impression that the Nokia 9 gives is excellent – it is a well designed, attractive device that will give users a sense of pride and status in owning it.

The Nokia 9’s innovative imaging capabilities are targeted to photography enthusiasts and from our time with the phone here at MWC, those capabilities hit the mark well there.

The Nokia 9 will be on sale at JB HiFi and Harvey Norman.  With the overseas pricing set at $699, we have a fair idea of what we’ll see locally, but final Australian pricing is yet to be announced.

We’ve already been in touch with the Australia HMD team to ensure we’ll get a review device so we’ll have a more detailed look at the phone and of course its camera capabilities soon.

When is it expected to be released in Oz? S10 or Nokia 9…big decisions…

Really interested in checking this out, the device I use most is a Nokia 8 despite having newer & flashier devices at hand & I previously had a Nokia 1020 which took incredible photos that I still don’t believe any other phone has really matched.

Value for money on this device looks to be great, interested in battery bench-marking to see how it fares though. Side by side camera shootouts with the XS Max & S10+ will also be interesting!