MWC 2019 has been all about 5G. 5G is everywhere, well at MWC it is, just unfortunate that so very few people can actually use it at the moment.

On Sunday Telstra spoke about their new 5G network and along the way CEO Andy Penn said that the new HTC 5G Mobile Smart Hub would be the first device ready for their network and they were excited about what it would bring. Apparently he wasn’t the only one.

Not only were Chris and I were impressed with the device and all that it can do after getting some hands on time with it many others were too.

At the end of the day Tuesday some of those publications giving out awards dropped a few in on HTC. Talk Android, T3, Best Products and Gear Diary all dropped their “Best in Show” awards on the HTC stand awards their prizes to the HTC 5G Mobile Smart Hub. 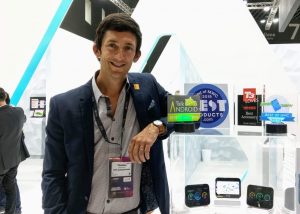 The 5G Mobile Smart Hub runs on Android 9.0 and does so many things that a standard Android device can. We are not surprised with HTC winning some awards and finally getting some praise for a mobile product that is actually great. It’s been a very lean time for HTC of late and we can only hope it is on the improve from here.

We will be getting review unit(s) to try out around the country once they do launch on Telstra’s 5G network in the next few months. You can bet we will be backing up as much as the internet as the 5G network will allow to test them out.

HTC has excelled itself by bringing out an entirely new device category.

It looks enticing. But no doubt other manufacturers are now rushing to design copycat devices.