Home Mobiles Assistant and Artificial Intelligence How to call Google Assistant using the Bixby button on the Galaxy... Yesterday Samsung started to roll out an update to Bixby that would allow you to remap either the single or double tap of the Bixby button to a new function or app. However, in that update, Samsung blocked the ability to open other digital assistants list Google’s Assistant, Microsoft’s Cortana or Amazon’s Alexa.

We have to admit this is a pretty petty move by Samsung who clearly knows the number one thing people want to do with the Bixby button is to remap it to another Assistant. If you’ve got a Galaxy S10, S9, S8 or a Note 9 and 8 and you’d like to summon your favourite assistant we’ve found two workarounds thanks to the team at XDA.

First Option – Secure enough, but not all that quick

Bixby has the option to open any installed app via voice, eg press the Bixby button and say open Assistant and Bixby will open the Google Assistant. That would become very cumbersome very fast doing that every time, however, using the “Run Quick Command” feature of Bixby you can pre-program the button to ‘say’ open assistant. This isn’t the fastest method but it does work.

Do do this go to Settings-> Advanced feature->Bixby Key, from there select if you want Bixby to be summoned via a single or double press, whichever you don’t select will be customisable. Eg I selected Bixby via the double press, so a single tap of the Bixby button will now be able to be set to load Google Assistant.

Once in the Bixby Key setting you can select run a quick command, if you haven’t set up a quick command-click to link, set up a command with the text “open assistant” and when you map the button to that it will open Google Assistant, after a short delay. I tried to make a screen recording but Bixby blocks all screen recordings while active……

There is however another way of achieving this functionality that’s both quicker but a little less secure. The team over at XDA has created a custom app based on a tasker routine that will let you auto map Bixby to any assistant installed on your device, well almost any, for some reason Alexa doesn’t work because of how Amazon has made their app.

This does require you to sideload an app, and while we trust the team at XDA, sideloading is fraught with risks, just know that going in. If you want the smoother experience first downloads XDAs APK here. After installing it run the app and select the app you want to set as default eg Google Assistant. 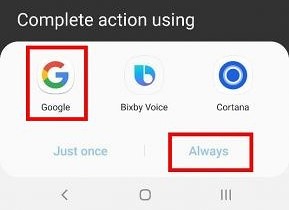 From there follow the same steps as before but instead of choosing “Run quick command” choose “open app”, select Bixby Button Assistant Remapper and you’ll be set. After that each time you single press the Bixby button you’ll get whichever assistant you choose. Either a double tap or long press will still summon Bixby, so to paraphrase Meatloaf, 1 out of 3 ain’t bad?

It really is a shame that Samsung has blocked consumers from easily choosing the Assistant they want to use, it feels very anti-competitive and anti-consumer if we’re being honest. That said the official and unofficial workaround is rather simple but ultimately seems unnecessary.

It will be interesting to see if this starts Samsung off on a game of whack-a-mole as they try and prevent 3rd party apps like this from giving users back the choice they should have had all along.

Bixby is the worst thing ever invented. Sold on my Samsung Note9 and brought a Samsung J5 pro because of Bixby……

Now you could upgrade and live in a bixby adjacent world!

Holding my home button opens my assistant? Isn’t that easiest of all. S9.

Or just install bxActions from the Play store, which allows remapping of the button to just about anything, including Assistant.