Last year Google released their new tablet, the Pixel Slate, running ChromeOS. Unfortunately for Australians it has not been released here and there is no easy way to get one here. Early on Kogan listed it on their website but it just said coming soon but today that has been updated to available now, shipping in 1-2 weeks.

Kogan now have the m3, i5 and i7 versions available for purchase with the Celeron version and keyboard still “Coming Soon”. The prices, without delivery cost, are as follows:

At this stage the keyboard is not available unfortunately so you would be paying for a tablet only. If you have a portable Bluetooth keyboard then you are set. 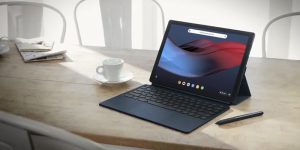 While the Pixel Slate has received mixed reviews around the blogosphere it is still a Made By Google premium device that will most likely continue to see improvements and updates with its UX in the coming years. As such it is a device worth considering if you are after a ChromeOS device but at that price for ChromeOS it is a tough sell when you can buy other OS laptops with greater functionality for that price.

Anyway, if you have been waiting for “local” availability of a Pixel Slate before purchasing now could be the time to act. Head on over to the Kogan website to check out all the Pixel Slate variants available.

I won’t be getting one now… What are those comparable options again?!?

Even Microsoft kept a Surface model under $1000. Geez Google, you think your Apple or something??

Those prices are a joke, especially considering the mixed reviews. A surface product would be a far better option. Our even the new Samsung tablet coming out.

Expensive. I was going to get one but due to the delay in AU availability I ended up buying the HP Chromebook x2. For $1300 it’s about the same configuration as the Slate i5 but includes a keyboard and stylus.