Home News and Editorial Is the nubia Alpha more than just a gimmick? We took... The nubia Alpha is a different take on the flexible display and is the first in a product category that could well take off in the coming years. Android (Wear OS) smartwatches are struggling to find a foothold in the industry so nubia decided to stick the phone onto the wrist because why not?

The nubia Alpha is “the world’s first wearable smartphone with a flexible wrap-around display”. The 4.01 inch flexible OLED display gives 230 percent more screen area than standard wearable displays. The watch, yes I’m going to call it a watch, can be controlled with a voice assistant, gestures and of course touch and has Bluetooth, Wi-Fi and eSim connectivity.

The watch has a camera, of course – it is a smartphone on the wrist. The camera is a 5MP sensor with a 82 degree wide-angled lens and large f/2.2 aperture. Luckily it is water resistant and constructed from stainless steel and comes in Black and Gold. Powered by a Snapdragon Wear 2100 processor it has a 500mAh battery with a magnetic charging connector with quick charge technology. With 1GB of RAM and 8GB of onboard storage it is specced well above other smartwatches.

All this sounds great but how was it in real life?

The watch has a main section to the face but the top and bottom third of the display are flexible and wrap around the wrist. There is a camera on the right of the display and the sensor for gestures on the left.

We tested out the gestures first and when they worked they were great but they were extremely inconsistent. Swipe to the left to move the display to the left and obviously the same for right, up and down. They worked sometimes and required a certain speed and proximity to the sensor to be ideal — hopefully the functionality of gestures is improved before release of the device to the public. 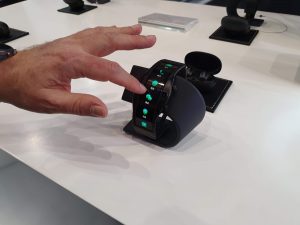 Using the touch was a lot easier although the interface wasn’t completely intuitive. We only had about 10 minutes of hands on with it and in that time the interface was a bit confusing with various layers to the UI. Navigating to the various layers was easy but the layers seemed to be hidden in places we didn’t expect. I suspect that after using it for a couple of hours and having concentrated time with it we would be able to navigate it better.

The camera is a nostril cam for sure. Unless you hold your wrist well above your head that camera is going to be pointing right up your nose making for a not-so great shot — unless it is Jason- see below: 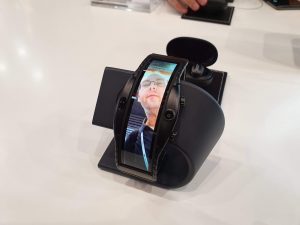 The nubia Alpha will arrive in two versions with a Bluetooth version hitting the global market in April at a cost of 449Euros (AU$720) and the eSim version hitting China in April, Europe in Q3 and North America in Q4 of this year. The eSim version will be available in a black version for 549Euro and an 18K Gold Plated versoin for 649Euro.

In the end the nubia Alpha is an innovative product which is still a bit rusty but will likely improve with future generations should it be successful enough to warrant more generations. Is it ready for the prime time yet? Not yet in my opinion but with some software updates there is no doubt it could be very useful but it may be too useful.

Do you really need that much functionality on your wrist? Will your phone no longer be required? It is an interesting dilemma but if this is the Alpha I am looking forward to seeing the Beta and the final release.