Samsung was the first big player to announce a foldable phone with the Galaxy Fold and while the price may well put it out of reach of most people it is already planning two more foldable phones to follow up according to reports today.

While the Galaxy Fold folds inwards one of the new devices will fold outwards. The second new device is said to be a clamshell device (eg. flip phone). The two new devices represent experimentation in an attempt to find the design that fits best and if Samsung try them all they will have a foot in the door no matter where the chips may fall.

No one knows what the ideal design is yet. The time is ripe for experimentation. Many of these designs won’t be successful, but industry players will learn valuable lessons along the way. Bryan Ma, VP of devices research at IDC

According to reports the clamshell device will be unveiled either later this year or early next year and will arrive with a display also on the outside of the device like the Galaxy Fold but depending on the success of that display on the Galaxy Fold may remove it. 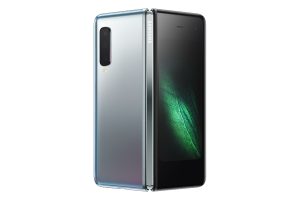 The outward folding device will arrive after the clamshell device and will be thinner than the others due to not requiring an extra display. The report also suggests that Samsung may move to incorporate an in-display fingerprint sensor in the new foldable lineup.

Even with the new foldable phones in the pipeline Samsung is still trying to improve the foldable displays themselves. After folding them 10,000 times a crease does appear in the display — Samsung is considering replacing displays for free after the Galaxy Fold has been released.

With Samsung envisioning production of 1 million foldable phones this year it will be interesting to see how much demand there is for them. 1 million is not a lot of phones for someone like Samsung to sell so it would not surprise us to see Samsung declare the Galaxy Fold a “success” if it reaches that level.

Would you consider a foldable phone? How about if it was priced the same as other flagship phones?