We have been tracking the Huawei P30 line in the buildup to its announcement later this month in Paris. We have seen Huawei advertise that they will “rewrite the rules of photography” with the P30 series but today they have been caught out in what so many other manufacturers have also done.

In the process of advertising how great the camera system is on the P30 series of phones Huawei have been spruking images on Weibo which included a magnifying glass implying that it was showing the capabilities of its periscope zoom camera. Unfortunately someone in the marketing department decided to use photos taken by a DSLR camera and not a P30.

Over the weekend GadgetMatch found that the images used by Huawei to promote the camera in the P30 were actually stock images from professional photographers, taken with a DSLR camera. This is not the first time Huawei have been caught out by this having been busted in 2016 with the P9 and in 2018 with the Nova 3 but they are far from the only manufacturer to be caught out doing it. 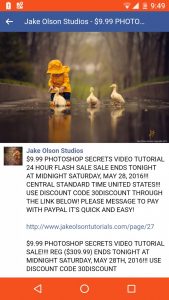 In the past Huawei have said that “The mobile photos and the content [are] made for illustration only. There might be a difference in the product visuals and sizes than reality, as well as the ad/film content.” That is, they are just an illustration of what is possible with the camera in the current phone being advertised.

While Huawei do not say in their advertising that the images were in fact taken with a P30 series phone it is implied and we suspect someone needs to have a word with their marketing department considering this is the third time they have been found to be using DSLR photos to advertise the capabilities of a smartphone camera system.

We have no doubt that the photos taken with the P30 series phones will be phenomenal given the quality of photos produced by their phones last year — it is just a shame they didn’t trust them enough to use them in their marketing material.