In a bid to improve the consistency of app icons across Android, Chrome OS and the web Google has released new design specifications for app icons. Google’s going full squircle for app icons this time around, and if developers don’t jump on board the drop shadow train they’ll find their icons scaled down and squircled automatically!

As explained in a blog post and in the new design specifications themselves, Google is moving all app icons to a consistent rounded square with a drop shadow moving forwards. The old transparent app icons of different shapes and sizes (that I personally like) are going away, we can look forward to an iOS-esk monotonous appearance to icons. 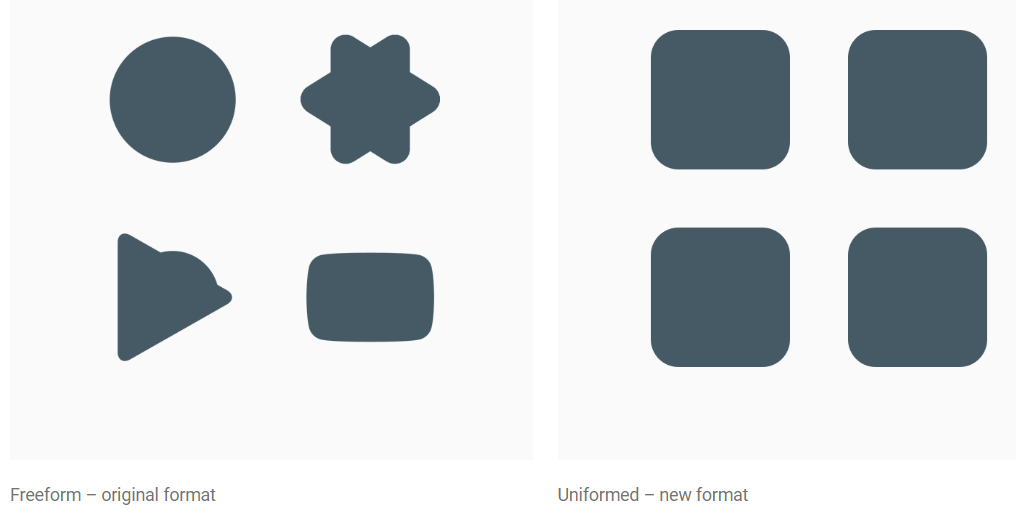 Overall the app icons are staying the same overall size, Google is just requesting the app developers move to a consistent square background. This could either mean redesigning a new full frame icon that’s square, or dropping their existing icon into the middle of a white background. Once developers a have designed their new square app icon, Google will automatically squircle it and add the drop shadow to ensure that the corner radius and shadows are consistent.

Ed. I think this move is hideous. Android’s motto ‘Be Together, Not The Same’ has well and truly been forgotten. For shame.

Developers can start uploading their new icons from early April this year, any who don’t will see their app icons automatically adjusted after the 24th of June this year. Below is a sample of what we can expect if a developer chooses to update their icon, or leaves it for auto-squircling.

In my app drawer now I have 95% circled apps, and I like it like that! The outliers are Aviary, Viagogo, and the shrug emoji keyboard app. Rounded squares have, like others said, never really been appealing :/

Well, this is rubbish. I like having odd shaped icons around the place. And I really dislike squircles.

If I wanted my Android device to look like it used iOS I’d buy an OPPO handset.

Who is going to. Auto squircle? The app store or the pixel Launcher?

It’s all in the app store

The solve to what Google is inflicting on end users is a simple 3 step process.
1. Build a collection of suitable .PNG icons.
2. Use a launcher that allows you to replace individual icons.
3. Replace the icons that Google has broken.

Why are they punishing end users for dev laziness? The forced circlfication currently enforced on the pixel launcher irritates me to no end, it looks way worse than a few randomly shaped icons. Doubly annoying is the number of Google’s own apps that don’t bother with meeting the standard…

So what was the point of the adaptive icons then?

Just another thing Google is going to flush away ‘just because’

Probably because adaptive icons have been hit and miss.