Last year, when Google announced the end of the Inbox by Gmail experiment, we were given the approximate date of March 2019. It is now March 2019, and this means the end for Inbox is near.

So near, in fact, that it’s less than two weeks away.

If you’ve opened the Inbox app recently, you’ll have noticed a new splash screen. This screen lets you know about Inbox’s pending demise. Google promises users that they can “find their favourite Inbox features in the Gmail app”, but that’s not exactly true. 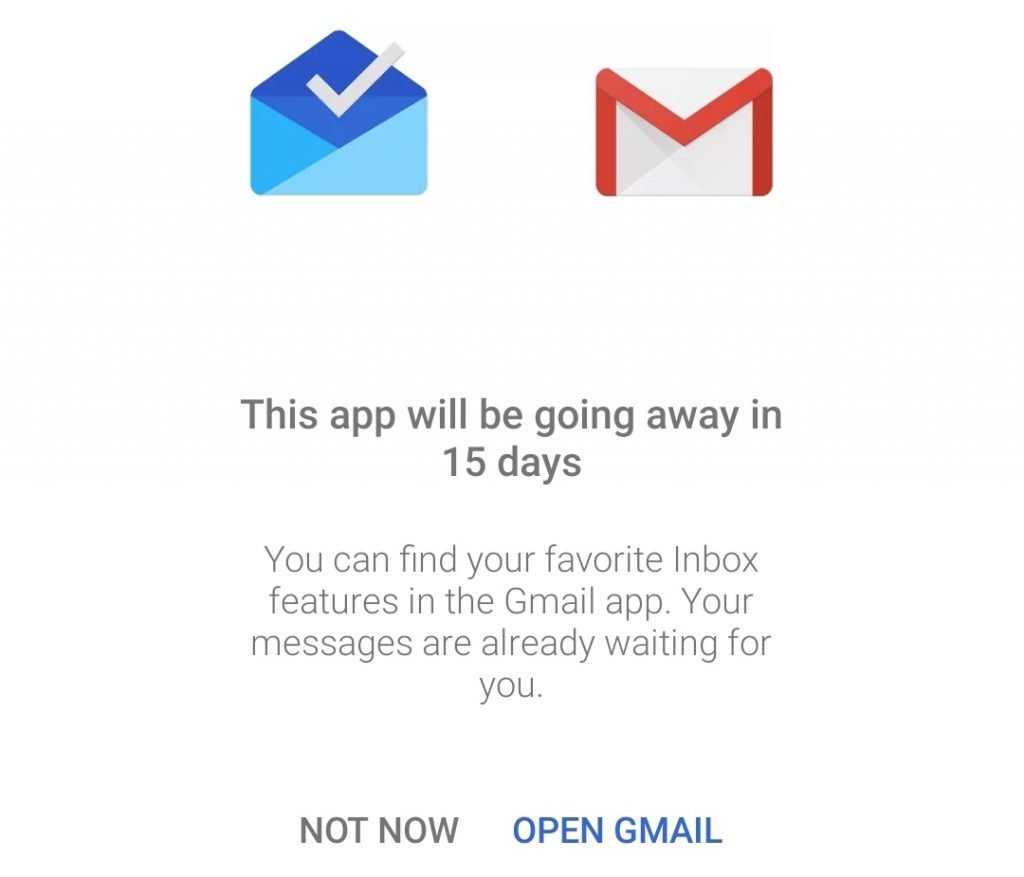 Gmail doesn’t do bundles, doesn’t do inline tasks or pinning with notes. It’d be great if it did, but it does not.

Some of the features are there, including snoozing and follow-up nudges, but we’d kind of prefer the rest of Inbox’s handy features came across.

After April 2nd, we just have to wait and see what we end up with.

Its happened,
“This app is no longer available.
You can find your favourite Inbox features in the Gmail app. you messages are already waiting for you.”

Deej
Reply to  The other Frank

I just uninstalled Inbox and sideloaded an older version from apkmirror. Seems to work fine so far, but not sure for how long though – doesn’t even come up with the countdown reminder / warning even. The current version I previously had stopped working this morning for me.

I’ll be hanging on to the very end as inbox is much better than Gmail at keeping everything organised & efficient.

Any chance you guys can smash out a quick tutorial or three on how to get a few thousand odd emails out of Gmail & onto some other providers’ server? Inbox was the web email service that enticed me away from a dedicated email client such as Outlook or Mozilla’s Firebird. I don’t really object to being the product rather than the customer, so long as the freebies I get are worth the trade. GMail, however, isn’t worth it. I’m thinking this might well the point where I’ve lost trust in Google’s ability to keep the services I use on… Read more »

So what will happen on 2nd April (luckly it wasn’t on the 1st April, as we could think its a joke), will Inbox simply not work?

Ditto to what clyde jones said. The bundling of trips is so handy traveling SE Asia with multiple airlines or multiple hotel bookings is a serious pain in Gmail. Inbox may have been too much of a change for the masses which I can understand, but please Google make all these inbox features available in Gmail for the rest of the early adopters/advanced users!

I started using Inbox as soon as it was available. Loved it. Made managing emails so easy, and loved the UI.
Switched back to Gmail last month (to get re-acclimated before Inbox was shut down). It’s better than it used to be, but really miss the bundling, the location/trip/purchasing previews on the main screen, instead of going into each category.