Huawei have attempted to keep their upcoming P30 flagship series under wraps but they can get out of the way of themselves it seems. Now the Singapore arm of Huawei has spilled the beans when announcing details of their launch event.

Spotted by Evan Blass, the Singapore launch event is set to take place on April 6 for a whopping 10 hours in Vivocity Central Court but that’s not all the details they spilled on the webpage.

Firstly they mention that there will be a free Huawei Watch GT and JBL Clip 2 Bluetooth Speaker with every purchase of a P30 or P30 Pro- it is unclear whether these are the same bonuses worldwide at this stage.

The colours of the device are hinted with the “colour of light and space”, a “rosy dawn”, “midday sky”, the “aurora” and “darkness of night”.

The main camera on the P30 Pro will be a 40MP shooter paired with “Huawei
SuperSpectrum Sensor, a periscope telephoto lens, Leica Ultra Wide Angle Lens and Huawei ToF camera.” The result is a 10 X hybrid zoom that includes OIS. 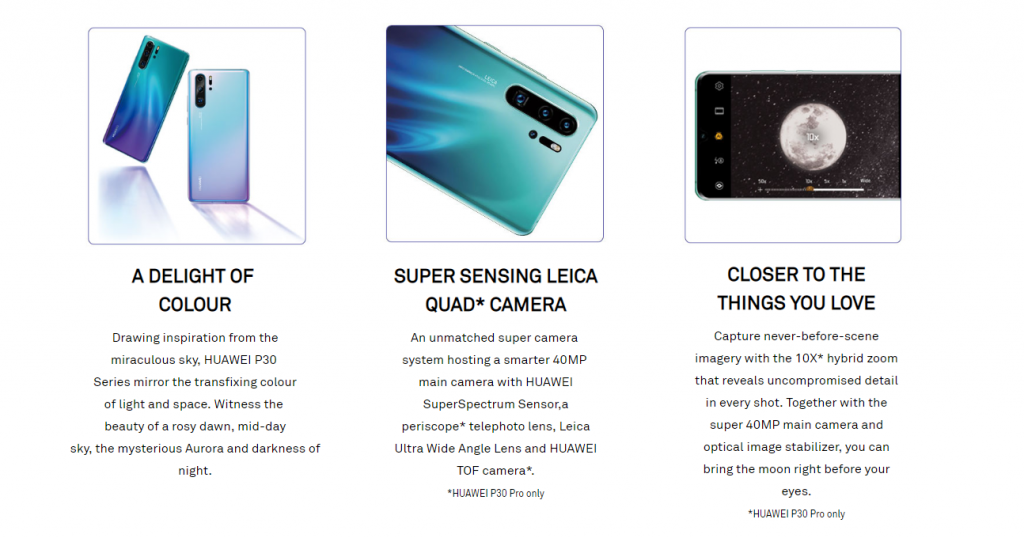 Night mode will once again be a feature with the capability to capture images with a “super high ISO” enabling the capture of moments in even the darkest situations.

There is also mention of a Dual-View Video where “two rear camera work at the same time allowing you to watch the overall view of the game and zoom into the players’ exciting actions.” This feature will apparently be arriving via an OTA update not long after release.

By now we must know pretty much everything there is to know about the Huawei P30 and P30 Pro. Hopefully Huawei have managed to keep some secrets for the launch next week. Stay tuned to see if they were able to keep anything secret.