We are in the midst of the launch of quite a few different phones but there is one that is set to take place in a month or two which has been overshadowed in recent times – the OnePlus 7. Rumours and leaks around the OnePlus 7 have been very scarce of late but overnight an apparent render has appeared, albeit a sketchy one.

A couple of Chinese websites are today showing off a render of what they say is the rear of the OnePlus 7 showing it in three different colours. The rear of the devices shows the rear triple camera setup which is not evenly spaced. Although we hope that the fact that the bottom lens is further from the middle lens than the top is from the middle to make way for a periscope zoom lens in the bottom camera we highly doubt that OPPO would be sharing their technology when it is in its infancy. 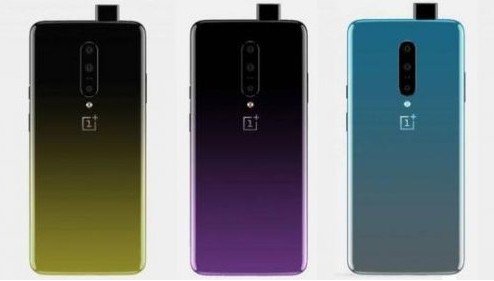 Of course the popup selfie camera is visible which matches all other renders and leaks we have seen of the device so far. The bit that I think is sketchy is the colour scheme. We have seen OnePlus prototypes in the past where they have toyed with using these types of colours but they have never released them as a standard colour.

OnePlus are not a big enough company to be able to release that many different colour schemes of the same phone, instead always opting for more basic colour schemes – black, white, but their other colours have been a red or blue for a special theme of event such as Chinese New Year or Avengers blue. I find it unlikely that they will release a phone with these gradient colours – it does not match their style.

I think that this image is a picture or render of various coloured prototypes that they were testing out and the hardware is legitimate but the colours are a stretch.

Whatever the case we still have a good six weeks or so until OnePlus announce the OnePlus 7 but I for one hope that we do not hear another single thing about the OnePlus 7 and instead we get a surprise when they step on stage to reveal it.

Very happy with my 6T and the only thing that isn’t so great is the slow speed of the in screen fingerprint reader.
For this reason I usually use face unlock, having the camera a popup is a no go for me. Glad I got the 6T as now way am I buying a phone with a camera like that.