We’ve long been fans of Dell’s XPS laptop line for a long time here at Ausdroid, considering them to be some of the best Ultrabooks around. Chris and I have both used an older model XPS 13 at various times since 2017, so when Dell offered us a look at the updated XPS 13 9380 laptop (this year’s model) just a little ahead of Mobile World Congress, we thought the high stress environment of a major tech trade show would be a perfect testing ground.

While XPS started life as Dell’s gaming range, it’s evolved in the last few years into a name recognised for portable performance. Over several generations the XPS 13 has developed a reputation as one of the best performance mobile laptops around.

The XPS 13 has had the same design of a few years now, although as you would expect each year it’s a little thinner and lighter. This year of course, there’s also some appreciable spec bumps in the right places over the previous generation. The specs for the review laptop were:

The laptop itself comes starts at $2209 for 8GB, 256GB, i7 and non-touch 1080P display, and goes up to $2974 for 16GB, 1TB, i7 and 4K touch display. Our review laptop configuration is priced at $2699. Unfortunately, the Australian website does not list an i5 version for those looking at a more moderately specced (and priced) option.

The XPS 13 design hasn’t really changed in the last few years. The laptop is one of the thinner ultrabooks around, although it looks and feels thicker than it actually is owing to its sharp design edges means. In fact it is thinner, narrower and lighter than the latest MacBook Air.

The styling is still sleek and compact, with some of the thinnest bezels around the edge of the display you will ever see. These all add up to a very attractive, yet industrial laptop.

The previous generation’s “nose cam”, which shot everyone sitting in front of the laptop from a frankly unflattering angle, is gone. Dell’s engineers found a way to fit the front-facing camera into the incredibly thin bezel above the display, making it ever so slightly wider than in previous generations but barely noticeably bigger. 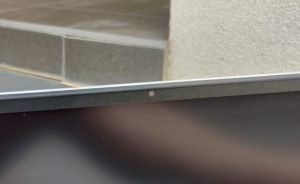 The keyboard is the same as years gone by, with a faux carbon fibre texture around the touchpad, and backlit keys that light up when you press one. I’d prefer to be able to define the time for which the keyboard remains lit, but there’s no such option.

The trackpad is easy to use, responsive and uses all the Windows 10 multitouch gestures without any issues. The trackpad itself may be smaller than some on the market but I found it plenty big enough to use for a long time.

The laptop is powered by an Intel i7-8565U CPU with 16GB of RAM – pretty up-to-date, but I definitely felt the lack of touch display on the review unit. Touch displays are something you don’t know you miss until you don’t have one. Many don’t think it is required, but I find it invaluable and use my own quite a bit. To add insult to injury, it’s also a lower resolution (FHD) than my own older model.

It’s a compromise. The laptop does cost a little less with the FHD 1080P non-touch display compared to the QHD+ touch screen option, and the drop in specs in theory allows the battery to last longer.

The display disappointed outside of its non-touch specs as well, with some occasional glitches where the display flickered – so quickly that at first I thought I’d just blinked. After searching through the Dell website I managed to finder a driver update tool and managed to update the drivers which, at this stage, seem to have fixed it.

There are three USB-C ports around the edges – one 3.1 with Power Delivery and DisplayPort compatibility, the other two with Thunderbolt 3 with Power Delivery and DisplayPort (4 lanes of PCI Express Gen 3). These three USB-C/Thunderbolt ports can be used to charge the laptop as well as for data. There are no USB-A ports, but Dell does include a USB-C-to-A adapter dongle in the box. Thanks, I guess.

As for graphics this has a Intel® UHD Graphics 620 with shared graphics memory video card. The XPS runs Windows 10 Pro as you would expect and is included in the price of the laptop.

Typing on the new XPS 13 felt different to my older model, but that could just be splitting hairs.

The keys feel like they have less cushioning, and there wasn’t as much feedback compared to an Asus laptop we were also testing out in while we were over in Barcelona.

Despite these misgivings, I did find the keyboard acceptable for extended periods – just not as good as some other laptop/keyboard combinations I’ve tried.

Our review unit came equipped with the latest Intel processor, and as such you would expect it to run everything we threw at it — and with 16GB of RAM and an Intel i7 processor pushing just a 1080P display that should not be a surprise.

At a trade show, the usual workload for the laptop includes running Chrome, Photoshop, and a few other basic programs. For those tasks it certainly was perfect, if not a little overkill.

I edited a couple of basic videos as well using Camtasia just to test it out and it performed admirably. The spec list on the Dell website pegs battery life at over 14 hours, and other reviewers have heaped praise on the laptop for longevity but I didn’t find that to be entirely accurate.

With a 52WHr 4-cell battery, you would expect the XPS 13 to have a battery life that lasts and lasts but my experience, with mostly light programs running and even with the display brightness set to around 25%, showed the battery running down faster than that. After using the laptop for maybe 30 minutes on battery, it would warn me that it only had 4 hours of battery life left.

I tested out this battery life while I was at work with the brightness at 25%, constantly refreshing the Android Beta webpage every 30 seconds. There was no video playing and no keyboard interaction and yet from full, the battery lasted 7 hours and 6 minutes before shutting itself down — a far cry from the 14 hours listed by Dell.

I really expected better of the battery life, especially running a lower resolution, non-touch display. The battery on my personal XPS 13 9360 with i7, 16GB RAM and 4K touch display is much longer than this review laptop.

The competition is fierce in the ultrabook category but Dell are there at the top fighting it out. Two of their main competitors are Apple and Asus.

As you can see the Dell XPS 13 is very comparable to its competitors in specs, size and pricing. In the end it comes down to preference. All of the above are comparable machines but each has their pros and cons. The Dell’s minimal bezels make it a very appealing device, especially when the rest of it is also compelling with a decent keyboard, trackpad and plenty of high powered ports.

The design might be a little tired but it’s not an unattractive laptop, and it impresses with the extremely small bezel around the edge of the screen.

It is easy to see why many consider this one of the best ultrabooks in the world, it’s just a little hard to love it in the review configuration. The specs are really not that exciting, and the low resolution non-touch display was disappointing – the QHD+ display with touch is a much better option if you can afford the upgrade.

In the end though, it’s the battery life that did it in – it simply doesn’t live up to Dell’s claims. While I hope that this will be fixed in the future, I can’t see software updates doubling the battery life to bring it in line with marketing claims. You shouldn’t have to wait for those updates anyway.

I recently purchased the same model as reviewed. There is an option in the BIOS to adjust the keyboard backlight timing.

Unfortunately unlike the US Dell site the AU site offers no option for pre-installed Ubuntu.