Home News and Editorial HMD Global’s Nokia X71 launches next week; may be the 8.1 Plus...

We’ve seen HMD Global bring a solid set of products to the smartphone market since it’s taken on the Nokia moniker and it looks like next week the company might be launching something a little bit new – at least, at first glance.

Taiwanese website Sogi is reporting that the company has sent out press invitations to the launch of a device they’re calling X71 – a distinct break from the company’s current naming conventions that are usually based on numbers with “.X” and “Plus” revisions. 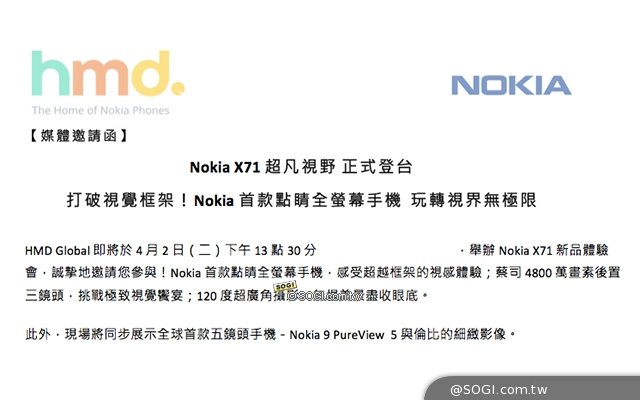 Of note, HMD Global mentions in the invitation that the X71 features a 48MP camera – the highest resolution sensor yet attached to a Nokia phone – and a 120 degree wide angle lens.

The X71 is also said to be the company’s first “full screen” phone. Don’t get too excited by this though – it’s a punch-hole “camera cutout” design, a la Galaxy S10.

While the naming convention is new, GizChina suggests that it could be intended only for the Chinese market, and this might be the rumoured-but-yet-to-launch Nokia 8.1 Plus. That speculation is fuelled by the premium midrange gap in the devices launched at MWC, where the Nokia 1 Plus, 3.2, 4.2 and 9 handsets were revealed.

Time will tell, with the launch event taking place in Taiwan next week, April 2.

I just want to know IF/WHEN Australia going to get it Oh,& how much.

no its for china and taiwan